The fuse is the current interrupting devices which break or open the circuit by fusing the element and thus remove the faulty device from the main supply circuit. The fuses are mainly classified into two types, depends on the input supply voltages they are the AC fuses and the DC fuses. The different types of the fuses are shown in the image below. 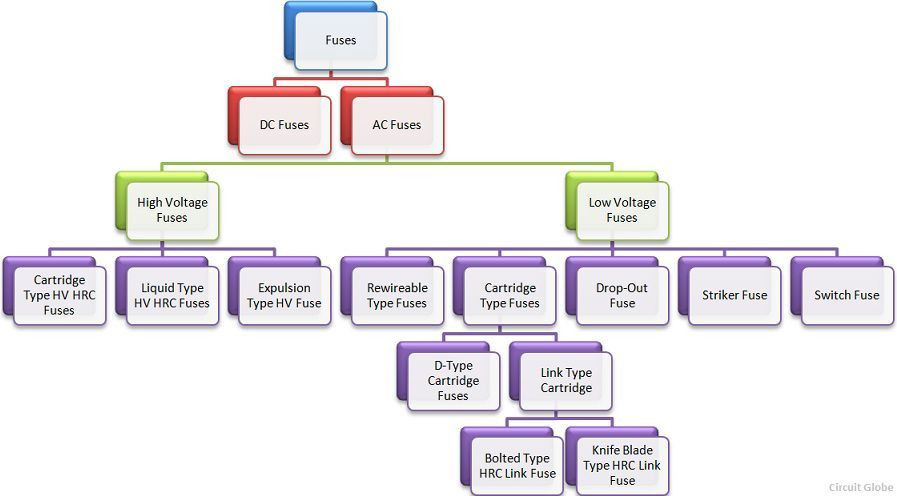 The DC fuse opens or breaks the circuit when the excessive current flow through it. The only difficulty with the DC fuse is that the arc produced by the direct current is very difficult to extinct because there are no zero current flows in the circuit. For reducing the DC fuse arcing the electrodes are placed more distance apart due to which the size of the fuse increases as compared to AC fuse.

The AC fuses are categorised into two types they are the low voltage fuses and the high voltage fuses. The frequency of the AC fuses changes it amplitude from 0º to 60º in very one second. Thus, the arc extinction in the AC circuit can be done easily as compared to the DC circuit. 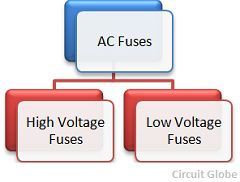 The low voltage fuses can be further divided into four classes shown below in the image Semi-enclosed or rewirable type and totally enclosed, or cartridge type switches are the most commonly used switches.

This type of circuit is mostly used in the small current circuit or for domestic wiring. The fuse case and the fuse carrier are the two main parts of the rewirable fuse. The base of the fuse is made up of porcelain, and it holds the wires which may be made up of lead, tinned copper, aluminium or alloy of tin-lead. The fuse carrier can be easily inserted or taken out in the base without opening the main switch. 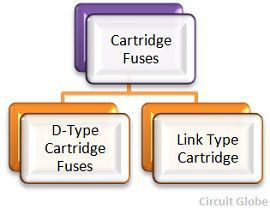 HRC fuse has the high-speed operation and also does not require maintenance. But the fuse element of the HRC fuses needs to be replaced after each operation, and it also produced the heat during the faults which will affect the operations of the nearby switches.

The enclosure of the HRC fuse is filled with powdered pure quartz, which acts as an arc extinction medium. The silver and copper wire is used for making the fuse wire. The fuse wire has two or more sections which are joint by using tin-joint. The tin-joint reduces the temperature under overloaded condition.

For increasing the breaking capacity of the fuses two or more silver wire is joined in parallel with each other. These wires are adjusted in such a way so that only one wire will melt at a time. The HRC fuse is of two types 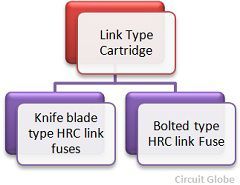 In knife blade type switches the fuse wire is replaced with a live circuit with the help of fuse puller.The bolted type HRC fuses have two conducting plates which are bolted to the fuse base. This fuse requires the additional circuit for taking out the switch without getting a shock.

The melting of fuse causes the fuse element to drop out under gravity about its lower support. Such type of fuse is used for the protection of outdoor transformers.

It is a mechanical device having enough force and displacement which can be used for closing tripping/indicator circuits.

Such type of switches is used for low and medium voltages circuit. The rating of the fuse unit is in the range of 30, 60, 100, 200, 400, 600, and 800 amperes. The fuse unit is available as 3-pole and 4-pole unit. The making capacity of such type of fuses is up to 46 kA. They can safely break depending upon rating currents of the order of 3 times the load current. 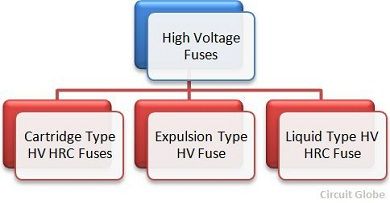 The fuse element of the HRC fuse is wound in the shape of the helix which avoids the corona effect at the higher voltages. It has two fused elements placed parallel with each other, one of low resistance and the other is of high resistance. The low resistance wire carries the normal current which is blown out and reducing the short circuit current during the fault condition.

Such type of fuses is filled with carbon tetrachloride and sealed at both the ends of the caps. When the fault occurs then the current, exceed beyond the permissible limit, and the fuse element is blown out. The liquid of the fuse acts as an arc extinguishing medium for the HRC fuses.They may be employed for the transformer protection and the backup protection to the circuit breaker.

Expulsion type fuses are widely used for the protection of feeders and transformer because of their low cost. It is developed for 11kV, and their rupturing capacity is up to 250 MVA. Such type of fuses comprises a hollow open-ended tube made of synthetic resin-bonded paper.

The fuse elements are placed in the tubes, and the ends of the tubes are connected to suitable fittings at each end. The arc producing is blown off in the inner coating of the tube, and the gases thus formed extinguish the arc.

4 thoughts on “Types of Fuses”