Definition: An optical fiber is a thin flexible strand made up of glass(silica) or plastic that is used for transmitting optical (light) signals. Usually, the diameter of the optical fiber is more as compared to human hair.

More specifically, we can say that it is a waveguide that has the ability to transmit electromagnetic waves (in the form of light) at optical frequencies.

An optical fiber is basically a combination of core and cladding. Here, the core is a cylindrical dielectric composed of glass, through which light propagates and it is enclosed in a plastic cladding.

The figure below shows the structure of an optical fiber: 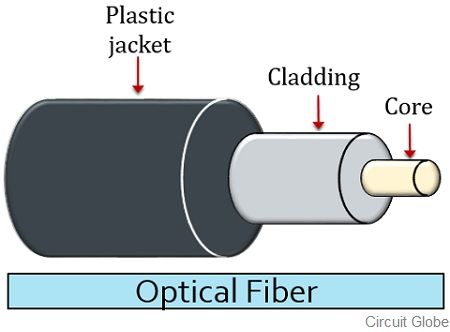 The whole assembly is surrounded by an elastic jacket in order to protect the fiber.

It is noteworthy in the case of optical fibers that cladding does not participate in lightwave transmission as light only propagates through the core. But, in order to reduce the signal losses due to scattering, an optical fiber is necessarily a combination of the core as well as cladding.

The optical fiber is composed in such a way that the core refractive index must be more as compared to the cladding.

Propagation of light ray through an Optical Fiber

As we know that an optical fiber allows propagation of the signal in the form of light (i.e., photons). Now the question arises how light propagates through an optical fiber?

The answer to the above question is total internal reflection.

When light is allowed to transmit through an optical fiber then it travels through the core only, by experiencing continuous reflections from the cladding. These reflections are nothing but total internal reflections.

As we have already discussed in Total Internal Reflection, that it only occurs when light incident from a denser to a rarer medium with the angle of incidence more than the critical angle.

With such an angle of incidence, light propagates through the core by making successive reflections rather being refracted at the cladding.

As the core is a cylinder with a smaller diameter thus, an only small reflection of the light ray will take place and hence this causes the incident angle to be definitely greater than the critical angle.

Modes of Propagation in an optical fiber

When light travels along the fiber then it is obvious that will transmit down the core by taking either single or multiple paths. So basically modes are nothing but the number of paths a light ray takes during propagation along the fiber.

There exist basically two modes of propagation through an optical fiber: 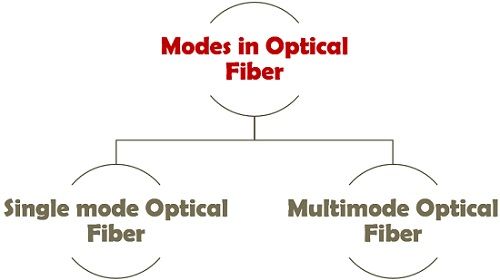 So, due to the transmission of the wave due to only one path, the level of signal distortion at the time of transmission is also reduced. This is so because light rays do not transmit through multiple paths hence fidelity of signal at a longer distance is also maintained.

As the diameter of the core is small thus it requires a sharp light beam for which majorly laser light source is utilized.

Here, the chances of signal dispersion and attenuation are more than that of single-mode fiber. At the same time, the broader core diameter permits several propagating paths for the light waves.

What are glass fibers?

Glass is basically an amorphous solid that is generally hard, transparent and brittle in nature. It is composed by melting and quenching several materials. Glass is a material that does not hold a well-defined molecular structure rather it has an arbitrary arrangement of molecules.

Let us have a look at the tabular representation of glass forming substance: 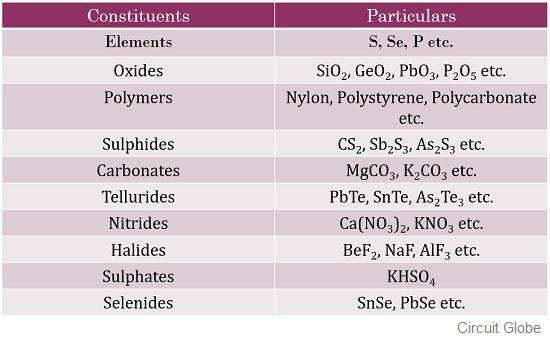 Usually, fibers are made from silica as it provides better operating characteristics.  Also, silica is chemically stable material and can be employed for use in the harsh environment also. The use of silica is more appropriate in case of optical communication.