The major differences between optical fiber and coaxial cable are listed below in the comparison chart:

Optical fibers are waveguides that are used for transmitting optical (light) signals from one end to another. These are basically made of glass or silica is a combination of core and cladding.

The core is the inner portion the fiber made of very pure silica glass which is surrounded by a glass cladding. And protection from external wear and tear, this whole fiber assembly is enclosed in a plastic jacket sometimes known as buffer coating.

The figure below shows the schematic structure of an optical fiber: 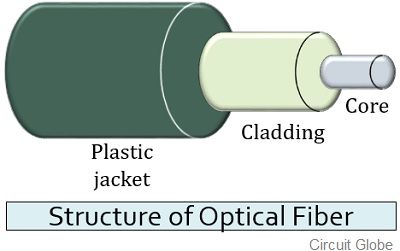 A signal through an optical fiber is transmitted through total internal reflection.

Basically, when the light is allowed to transmit through an optical fiber, then in order to transmit, the signal undergoes successive reflections from the cladding thereby travelling through the core.

In the case of the optical fiber, necessarily the refractive index of the core must be more than the cladding so as to have total internal reflection.

We know the principle of TIR that when light enters a rarer medium from a denser medium with the incident angle more than the critical angle. Then the incident ray gets reflected towards the same medium. This principle is utilized for transmitting an optical signal through an optical fiber.

The ray is allowed to the incident the core but due to variation in the refractive index the ray despite reaching the cladding, reflects towards the core. These continuous reflections cause the transmission of light from one end to the other.

Coaxial cables are also known as coax and are guided media that are used for transmission of electrical signals to some distances. Coaxial cables are basically conductors that allow electrons to flow through it. Mainly copper is used in the manufacturing of coaxial cables.

The figure below shows a coaxial cable used for transmitting electrical signals: 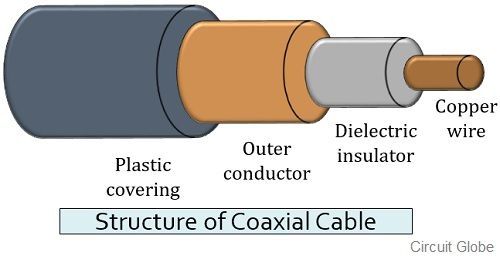 Here a flexible strand of copper is taken over which a dielectric insulator is surrounded. And this whole arrangement is enclosed in a metallic shield over which a plastic jacket is placed for protection towards environmental factors. It is given the name coaxial because the inner and outer conductor have a common geometric axis.

The electrical signals which are required to be transmitted through the coaxial cable are provided at the centre conductor. Also, the insulating medium confines the generated electric and magnetic field within the conductor.

It is used to transmit signals of optical frequency, thus finds applications in HDTVs, aircraft and in the medical field for the surgical purpose.

It is used to transmit radio frequency signals, hence finds applications in cable TV signal transmission as well as in internet and telephone connections.

Both optical fiber and coaxial cable are used for signal transmission. However, different types of signals are transmitted through both cables. Hence the two holds use in distinct fields.

1 thought on “Difference Between Optical fiber and Coaxial Cable”