Definition: Optical Line Terminal or optical line termination is a device that basically acts as a part of a passive optical network (PON). It is present in the central office of the network and manages the transmission and reception of information across the overall network.

OLT do so by converting an electrical signal into an optical signal or vice versa in order to ensure proper flow of the information.

Usually by the use of OLT information can be transmitted and received up to a distance of 20 Km.

OLT functions in such a way that it receives data or signal from long-haul or metro network and provides it to the users present in the PON. Also known as the flow of information in the downstream direction.

Likewise, the data from the long distant users are also accepted and distributed by the OLT.

It can manage one or more PON simultaneously.

The figure below shows an OLT that is handling 4 separate passive optical networks at the same time: 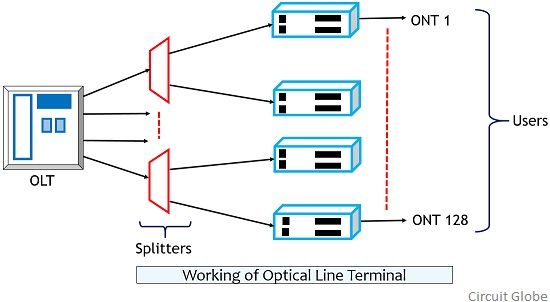 Here, each PON has individually 32 connections. Thus we can say a single OLT can provide the data or information to 128 users.

As we have already discussed that OLT offers a downstream and upstream flow of information. So, in case of downstream transmission, the network uses a wavelength of 1490 nm for both data and voice signal and 1550 nm wavelength of video signal distribution.

While, in the case of upstream flow, the wavelength of nearly around 1330 nm is used by PON for both voice and data signal.

As we have already discussed that an optical line terminal equipment is present at the central office. But optical network terminal, abbreviated as ONT is situated at the user’s zone itself.

Its function is to establish optical connectivity between the network and end user. ONT has the ability to provide combined telecommunication services according to the needs of users at the endpoint.

An ONT can be a simple box present outside the house of the end user or it can be attached to an indoor electronic rack. When mounted in an electronic rack, it determines the receiving end of each of the multiplexed data. Thereby providing the originally transmitted information to the desired location.

Both OLT and ONT are the modules of the passive optical network. And are present in the network to ensure smooth transmission and reception of data or information.

An optical network unit is of similar use but, despite being placing it inside the user’s area like ONT, it is placed inside a shelter, near to the area of the user. More specifically we can say, it is placed in some centralized area within an office building.

As it is placed in an open region, thus it must be rugged enough so as to withstand environmental conditions such as temperature variations etc.

Also, the cabinet in which it is to be housed must be water resistant, windproof etc. in order to ensure proper protection.

Along with all this, a source of power must be provided to it for the proper functioning.

To establish a connection between ONU and customer area, coaxial cable or optical fiber link can be used.