Before going through the detailed idea of symmetric versus asymmetric multiprocessing. Let us understand-

The term multiprocessing corresponds to the use of two or more central processing units within a single computer system in order to execute tasks parallelly. Basically, multiprocessing enables the system to execute various parallel processes within a system and this is done by incorporating multiple processors inside a single computer system. However, it is not necessary that a system always has more than one processor as sometimes there exist single processors within the system as well.

Thus, it is not wrong to say that a system may or may not be a multiprocessor system. However, if a system has multiple processors, then each processor can execute independent processes.

It is to be noted here that the CPU is responsible for handling the arithmetic and logical functions as well as carrying out input/output operations. So, to perform this, either single or multiple processors are required.

Symmetric Multiprocessing called SMP in short form is a type of multiprocessing system operation that uses multiple processors of the same configuration within a single system in order to execute multiple tasks. Here all the processors are of identical nature and are treated in an equal manner. 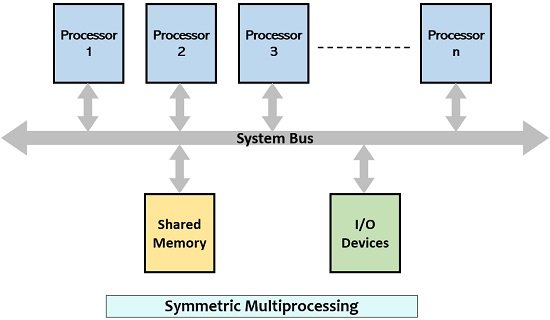 In this type, an operating system exists in memory and is accessible by all the processors within the system but not simultaneously. This means it is based on a shared operating system technique, called the floating master method. If multiple CPUs are required to run OS code, then the one which requested first will be able to execute first and till that time it will remain locked (called mutex) for the rest of the processors.

Asymmetric multiprocessing abbreviated as AMP is another type of multiprocessing technique that consists of multiple processors out of which one behaves as master and other than that one as slaves. The master processor is responsible for executing the operating system. 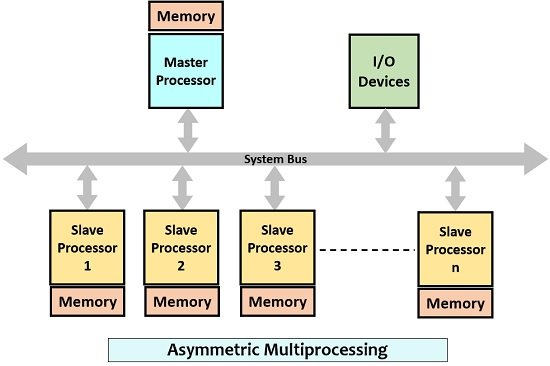 This technique allows concurrent running of several tasks on multiple processors. Its private memory holds the data structure which has the details for ready processes. Here if the master processor gets failed then one of the slave switches to perform the master processor operations.

From the above discussion, it is clear that SMPs are implemented on homogeneous cores i.e., the identical ones. While AMPs are implemented on homogeneous or heterogeneous cores i.e., non-identical ones. In SMP, system functions show dependency on load distribution thus, is not deterministic. Due to this reason, symmetric multiprocessing is not used in embedded systems.