Definition: Optical Modulation is the process by which a light wave is modulated (modified) according to a high-frequency electrical signal that contains information. These modified light waves are then transmitted either by a transparent medium or through an optical fiber cable.

More specifically, we can say that it is the process by which an electrical signal that contains message is converted into a light signal.

Basically, there exist two different methods of modulating the optical signal. These two methods are classified as: 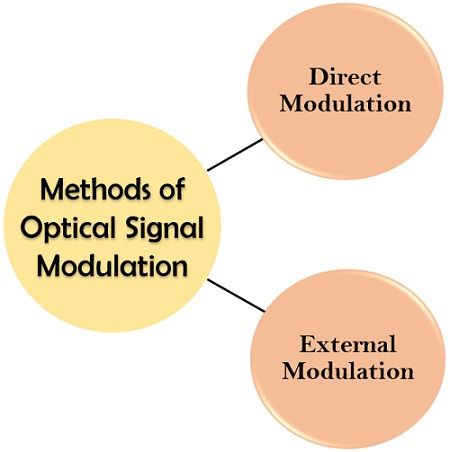 As the name itself is indicating that it is a modulation technique in which the information that has to be transmitted is directly placed over a light stream emitted by the source.

In this method, simply the driving current of the light source i.e., the laser is changed directly with the electrical information signal in order to generate a changing optical power signal. So, it does not require individual optical modulators for the modulation of the optical signal.

In this modulation technique, the major drawback is associated with the carrier lifetimes of spontaneous and stimulated emission along with photon lifetime of the source.

In external modulation, separate optical modulators are used that performs the modification of optical signals in order to change the signal characteristics.

It is basically used to modulate the signals having data rates of more than 10 Gbps. However, there is no any compulsion to use this method only for high data rate signals.

The figure below shows the operational technique of external modulator:

Here, the first block represents the light source which is basically a laser diode. After the diode, an optical modulator circuit is present that modulates the light wave emitted by the source according to the electrical signal.

It is to be noted here that the circuitry of the external modulator can be integrated combinely with the optical source or it can be considered as an individual device.

It is also known as Mach Zehnder Modulator and is composed of lithium niobate as its basic material. The figure below shows the operational method of electro-optical external modulator:

Here, a beam splitter and beam combiner are used to split and combine the light waves.

In this method, when an optical signal enters the modulator then the beam splitter splits the light beam into two halves and allows it to transmit through two different paths. Then the applied electric signal changes the phase of the light beam in one of the paths.

The light waves after transmitting through two different paths reach the beam combiner in order to recombine. This recombination of the two light beams can be constructive or destructive in manner.

This modulator is basically composed of indium phosphide. In this type of modulator, the electrical signal containing information varies the properties of the material of light propagation. So, according to the variation in the property either pulse 1 or 0 is achieved at the output.

It is to be noted in electro-absorption modulator that, one can integrate this modulator along with a laser diode and enclose it in a standard butterfly package.

This reduces the space, power and voltage requirements of the device instead of using separate laser source and modulator circuit.