Definition: Splicing of optical fibers is a technique used to join two optical fibers. This technique is used in optical fiber communication, in order to form long optical links for better as well as long-distance optical signal transmission. Splicers are basically couplers that form a connection between two fibers or fiber bundles.

At the time of splicing two optical fibers, the geometry of the fibers, their proper alignment and mechanical strength must be taken into consideration.

There exist basically three techniques for splicing the optical fibers. These are as follows: 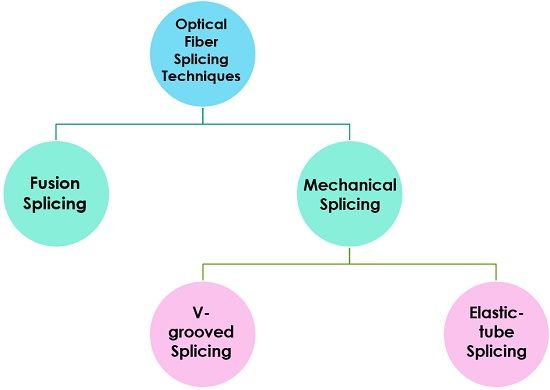 Splicing any fiber by making use of the fusion technique provides a permanent (long-lasting) contact between the two fibers. In the fusion splicing, the two fibers are thermally joined together. In this particular technique, an electrical instrument is necessarily used, that acts as an electric arc so as to form a thermal connection between the two.

First, the two fibers are aligned and butted in the way of their connection, this alignment is done in a fiber holder.

After this, the electric arc comes into action as when it gets switched on then it produces some energy, that heats the butt joint. The heating effect melts the ends of the fiber and then the two gets bonded together.

After the two forms a bond then their junction is covered with either polyethylene jacket or plastic coating so as to protect the joint.

The figure below shows the fusion splicing of the optical fiber: 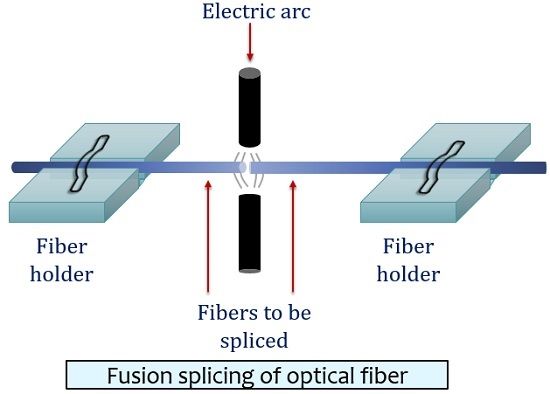 By making use of fusion splicing technique, the splice generated losses are very less. The loss range lies between 0.05 to 0.10 dB, both in case of single mode as well as multimode optical fibers. The technique that provides this amount of losses is very practical and useful. As only very little portion of transmitted power gets lost.

However, when fusion splicing is done, then the supply of heat that is to be provided must be in adequate amount. This is so because sometimes excess heat can generate fragile (delicate) joint.

In this splicing technique, initially a V-shaped substrate is taken and the two fiber ends are butted in the groove. Once the two gets placed inside the groove in proper alignment then they are bonded by an adhesive or index matching gel. This adhesive provides proper grip to the connection.

The V substrate can be either composed of plastic, silicon, ceramic or any metal.

The figure below shows the V-groove optical fiber technique: 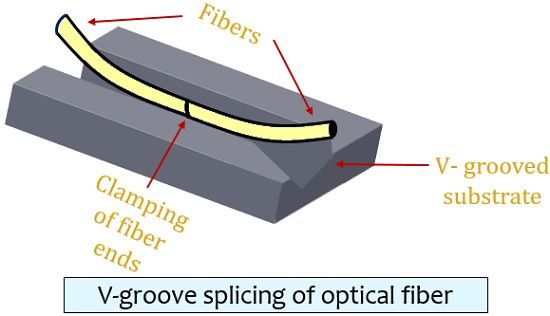 However, the fiber losses are more in case of this technique as compared to the fusion technique. Also, these losses majorly depend on the core and cladding diameter as well as core position with respect to the centre.

It is to be noted here that the two fibers do not form a continuous smooth connection as in the previously discussed case. Also, the joint is semi-permanent.

It is a technique of splicing the fiber with the help of the elastic tube and majorly finds its application in case of the multimode optical fiber. The fiber loss, in this case, is almost similar to that of the fusion technique. However, the need for equipment and skill is somewhat less than the fusion splicing technique.

The figure below shows the elastic tube splicing technique:

Basically, the elastic material is rubber, inside which a small hole is present. The diameter of this hole is somewhat less than the diameter of the fiber to be spliced. Also, tapering is done at the ends of both the fibers in order to allow easy insertion inside the tube.

So, when the fiber with a slightly larger diameter than the hole is inserted inside the hole then, it eventually gets expanded as a symmetrical force is exerted by the material on the fiber.

Due to this symmetricity, proper alignment between the two fibers is achieved. In this method, different diameters of fiber can be spliced as here the fiber moves according to the axis of the tube.

Splicing basically provides permanent or semi-permanent joints. Also, sometimes the two fibers are joint on a temporary basis. So, connecting the two optical fibers temporarily is done by connectors.

1 thought on “Splicing of Optical Fibers”