Definition: The power which is actually consumed or utilised in an AC Circuit is called True power or Active power or Real power. It is measured in kilowatt (kW) or MW. It is the actual outcomes of the electrical system which runs the electric circuits or load.

Definition: The power which flows back and forth that means it moves in both the directions in the circuit or reacts upon itself, is called Reactive Power. The reactive power is measured in kilo volt-ampere reactive (kVAR) or MVAR.

Definition: The product of root mean square (RMS) value of voltage and current is known as Apparent Power. This power is measured in kVA or MVA.

It has been seen that power is consumed only in resistance. A pure inductor and a pure capacitor do not consume any power since in a half cycle whatever power is received from the source by these components, the same power is returned to the source. This power which returns and flows in both the direction in the circuit, is called Reactive power. This reactive power does not perform any useful work in the circuit.

The phasor diagram for an inductive circuit is shown below: 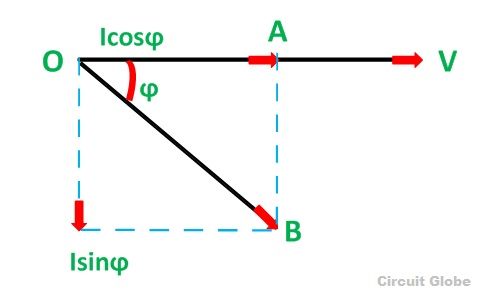 Taking voltage V as reference, the current I lags behind the voltage V by an angle ϕ. The current I is divided into two components:

Active component of the current

Reactive component of the current

The current component, which is in quadrature or 90 degrees out of phase to the circuit voltage and contributes to the reactive power of the circuit, is called a reactive component of the current.