The transducer whose output is obtained in the form of voltage or current without any additional auxiliary source is known as the active transducer. It works on the principle of conversion of energy from one form to another. The active transducer is also known as the self-generating transducer because they self-develop their electrical output signal. The energy requires for generating the output signals are obtained from the physical quantity which is to be measured.

Example: The Piezo electrical crystal is the example of the natural active transducer. The crystal has the property of producing the output voltage when the external force applied to them. The piezoelectric crystal is placed between the two metallic electrodes. When the force applied to the crystal, the voltage induces across it. 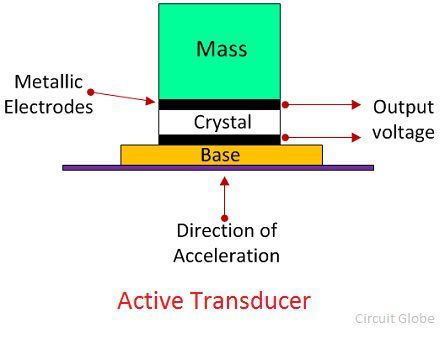 In passive transducer, the output is obtained by changing the physical properties (resistance, inductance, and capacitance) of the material. In other words, the passive transducer takes power from the external energy source for transduction. The word transduction means conversion of energy from one form to another.

Example: The linear potentiometer is the examples of the passive transducer. It is used for measuring the displacement. The POT requires the external power source ei for work. It measures the linear displacement xi. 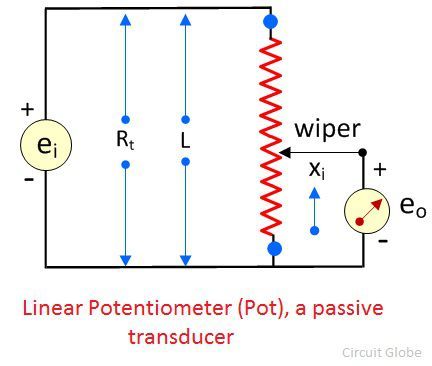 Consider the L is the length of the potentiometer. Ri is their total internal resistance and xi is their input displacement. The output voltage is calculated by the formula shown below.