A Transformer is a static electrical machine which transfers AC electrical power from one circuit to the other circuit at the constant frequency, but the voltage level can be altered that means voltage can be increased or decreased according to the requirement.

It works on the principle of Faraday’s Law of Electromagnetic Induction which states that “ the magnitude of voltage is directly proportional to the rate of change of flux.” 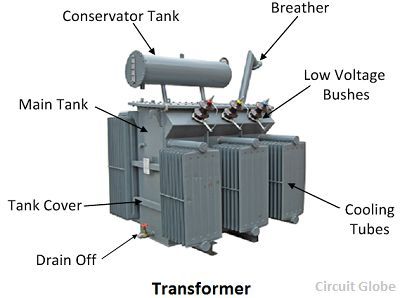 Necessity of a Transformer

Usually, electrical power is generated at 11Kv. For economical reasons AC power is transmitted at very high voltages say 220 kV or 440 kV over long distances. Therefore a step-up transformer is applied at the generating stations.

Now for safety reasons the voltage is stepped down to different levels by step down transformer at various substations to feed the power to the different locations and thus the utilisation of power is done at 400/230 V.

If (V2 < V1) the voltage level is lowered on the output side and is known as Step down transformer.

Construction of a Transformer

It mainly consists of

The various types are described below

4. On the basis of the supply

5. On the basis of cooling

EMF Equation of the Transformer

EMF Equation is given below

Where E1 and E2 are the voltages and N1, N2 is the number of turns in the primary and the secondary windings respectively.

Losses in the Transformer

Efficiency of the Transformer

This is all about the Transformer. Keep reading.

15 thoughts on “What is a Transformer”