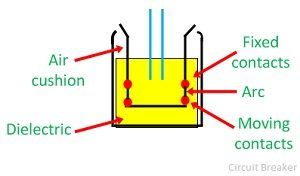 Whenever a fault occurs on any part of the system, the trip coil of the breaker gets energized and the moving contacts are getting apart from each other by some mechanism, thus opening the circuit.

The most general way of the classification of the circuit breaker is on the basis of the medium of arc extinction. Such types of circuit breakers are as follows :-