A breaker which used vacuum as an arc extinction medium is called a vacuum circuit breaker. In this circuit breaker, the fixed and moving contact is enclosed in a permanently sealed vacuum interrupter. The arc is extinct as the contacts are separated in high vacuum. It is mainly used for medium voltage ranging from 11 KV to 33 KV.

The above two properties make the breakers more efficient, less bulky and cheaper in cost. Their service life is also much greater than any other circuit breaker, and almost no maintenance are required.

It is very simple in construction as compared to any other circuit breaker. Their construction is mainly divided into three parts, i.e., fixed contacts, moving contact and arc shield which is placed inside the arc interrupting chamber. 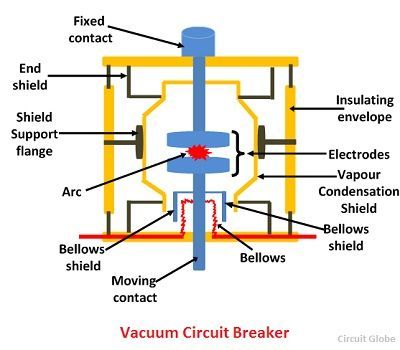 The outer envelope of vacuum circuit breaker is made up of glass because the glass envelope help in the examination of the breaker from outside after the operation. If the glass becomes milky from its original finish of silvery mirror, then it indicates that the breaker is losing vacuum.

The metallic bellows made of stainless steel is used to move the moving contacts. The design of the metallic bellows is very important because the life of the vacuum circuit breaker depends on the ability of the component to perform repeated operations satisfactorily.

When the fault occurs in the system, the contacts of the breaker are moved apart and hence the arc is developed between them. When the current carrying contacts are pulled apart, the temperature of their connecting parts is very high due to which ionization occurs. Due to the ionization, the contact space is filled with vapour of positive ions which is discharged from the contact material.

The density of vapour depends on the current in the arcing. Due to the decreasing mode of current wave their rate of release of vapour fall and after the current zero, the medium regains its dielectric strength provided vapour density around the contacts reduced. Hence, the arc does not restrike again because the metal vapour is quickly removed from the contact zone.

It is possible to reduce the current level at which chopping occurs by selecting a contact material which gives out sufficient metal vapour to allow the current to come to a very low value or zero value, but this is rarely done as it affects the dielectric strength adversely.

Because of the above-mentioned attribute of vacuum circuit breaker, it is capable of handling the severe recovery transients associated with short-line faults without any difficulty.

The contact material of the vacuum circuit breaker should have the following property.