Though gasses such as carbon dioxide,  nitrogen, freon or hydrogen are used as the arc interrupting medium,  compressed air is the accepted circuit breaking medium for gas blast circuit breakers. The reasons are given below.

The circuit breaking capacities of nitrogen are similar to compressed air and hence no advantage of using it. Carbon dioxide has the drawback of its being difficult to control owing to freezing at valves and other restricted passages. Feron has high dielectric strength and good arc extinguishing properties,  but it is expensive, and it is disintegrated by the arc into acid-forming elements. The desirable features to be found in air blast circuit breaker are

High-Speed Operation – It is very necessary on large interconnected networks so that the system stability can be maintained. This is achieved in circuit breaker because the time interval between the discharge of triggering impulse and contacts separation are very short.

Suitability for frequent operation – Repeated switching by an air blast circuit is possible simply because of the absence of oil, which rapidly carbonizes with the frequent operation and because there is an insignificant amount of wear and tear at the current-carrying contact surfaces. But it must be remembered that if frequent switching is anticipated, then the maintenance of a sufficient air supply is essential.

Negligible Maintenance – The ability of the air blast circuit breaker to deal with repeated switching also mean that negligible maintenance is required.

Elimination of Fire Hazard  – Because of the absence of oil the risk of fire is eliminated.

Reduced Size  – The growth of dielectric strength is so rapid in air blast circuit breakers that final gap required for arc extinction is very small. This reduces the sizes of the devices.

The air blast needs an additional compressed air system which supplies air to the air receiver. When opening air is required, compressed air is admitted to the arc extinction chamber. It pushes away the moving contacts. In doing so, the contacts are pulled apart, and the air blast moves away the ionized gas along with it and assists arc extinction.

Air blast extinguishes the arc within one or more cycles, and the arc chamber is filled with high-pressure air, which prevents restrikes. The air blast circuit breakers fall under the category of external extinguishing energy type. The energy supplied for arc quenching is achieved from the high-pressure air, and it is free from the current to be interrupted.

All air blast circuit breakers follow the principle of separating their contacts in a flow of arc established by the opening of a blast valve. The arc which is drawn is usually rapidly positioned centrally through a nozzle where it is kept to a fixed length and is subjected to the maximum range by the air flow. The air blast circuit breakers according to the type of flow of blast of compressed around the contacts are of three types namely axial, radial and cross blast. 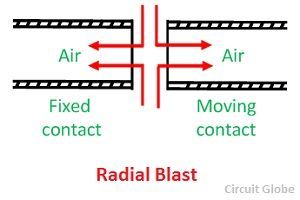 The essential feature of air blast circuit breaker is shown above. The fixed and moving contacts are kept in a closed position by spring pressure under normal operating conditions. The air reservoir tank is connected to the arc chamber through an air valve, which is opened by a triple impulse. 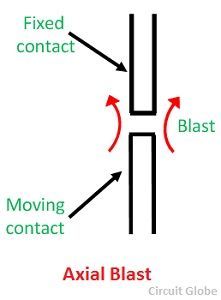 When the fault occurs, the tripling impulse causes opening of the air valve connecting the reservoir to the arcing chamber. The air entering the arc chamber exerts pressure on the moving contacts which moves when the air pressure exceeds the spring force. 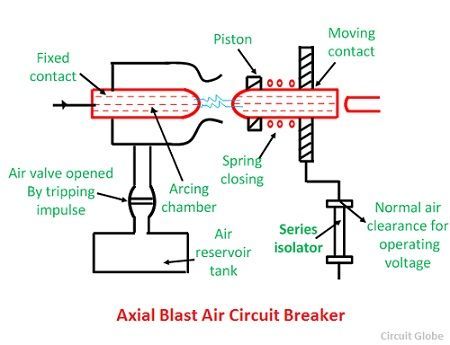 The contacts are separated, and an arc is developed between them. The air flowing at a great speed axially along the arc cause removal of heat from the edge of the arc and the diameter of the arc reduced to a very small value at current zero.

Cross Blast Air Circuit Breaker – In such breaker,  an arc blast is directed at right angles to the arc. The schematic representation of the cross principle of cross blast air circuit breaker is given in the figure below.  A moving contact arm is operated in close spaces to draw an arc which is forced by a transverse blast of air into the splitter plates, thereby lightening it to the point when it cannot restrike after zero current. 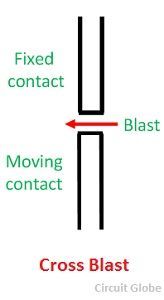 Resistance switching is not normally required as the lightening of arc automatically introduces some resistance to control the restriking voltage transient but if extra resistance is thought desirable. It is possible to introduce it by connecting it in the section across the arc splitter.