Oil circuit breaker is very easy in construction. It consists of current carrying contacts enclosed in a strong, weather-tight earth metal tank and the tank is filled with transformer oil. The oil is both acts as an arc extinguishing medium and as an insulator between the live part and earth.

At the top of the oil, air is filled in the tank which acts as a cushion to control the displaced oil on the formation of gas around the arc and also to absorb the mechanical shock of the upward movement of oil. The breaker tank is securely bolted for carrying out the vibration caused on interrupting very high current. Oil circuit breaker consists gas outlet which is fitted in the tank cover for the removal of the gases. 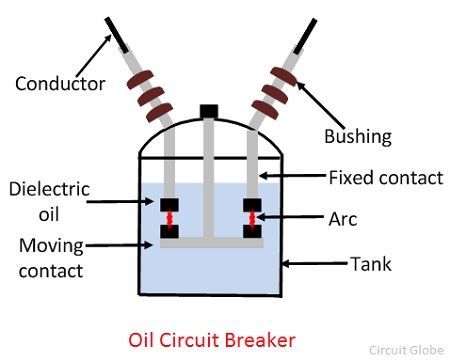 During the normal operating conditions, the contact of the oil circuit breaker is closed and carry the current. When the fault occurs in the system, the contacts of the breaker are moving apart, and an arc is struck between the contacts.

Due to this arc, a large amount of heat is liberated, and a very high temperature is reached which vaporises the surrounding oil into gas. The gas, thus liberated surrounds the arc and its explosive growth around it displace the oil violently. The arc is extinguished when the distance between the fixed and moving contact reaches a certain critical value, depends on the arc current and recovery voltage. 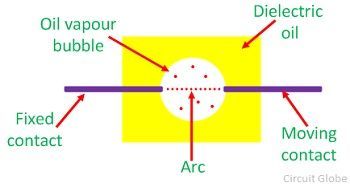 Advantages of Oil as an Arc Quenching

Disadvantages of Oil as an Arc Quenching

After a circuit breaker has interrupted by short-circuit current, sometimes their contacts may get burnt due to arcing. Also, the dielectric oil gets carbonized in the area of the contacts, thereby losing its dielectric strength. This results in the reduced breaking capacity of the breaker. Therefore, the maintenance of oil circuit breaker is essential for checking and replacement of oil and contacts.