SF6 circuit breakers mainly consist of two parts, namely (a) the interrupter unit and (b) the gas system.

Interrupter Unit – This unit consists of moving and fixed contacts comprising a set of current-carrying parts and an arcing probe. It is connected to the SF6 gas reservoir. This unit consists slide vents in the moving contacts which permit the high-pressure gas into the main tank. 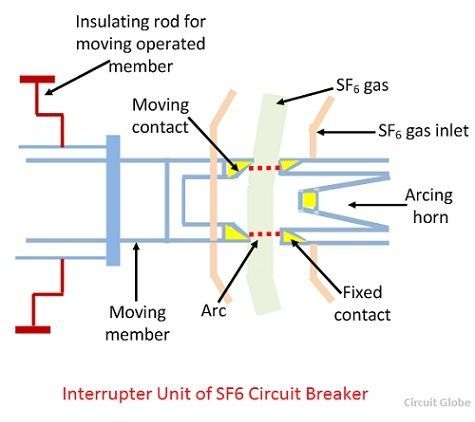 Gas System – The closed circuit gas system is employed in SF6 circuit breakers. The SF6 gas is costly, so it is reclaimed after each operation. This unit consists low and high-pressure chambers with a low-pressure alarm along with warning switches. When the pressure of the gas is very low due to which the dielectric strength of gases decrease and an arc quenching ability of the breakers is endangered, then this system gives the warning alarm.

In the normal operating conditions, the contacts of the breaker are closed. When the fault occurs in the system, the contacts are pulled apart, and an arc is struck between them. The displacement of the moving contacts is synchronised with the valve which enters the high-pressure SF6 gas in the arc interrupting chamber at a pressure of about 16kg/cm^2.

The SF6 gas absorbs the free electrons in the arc path and forms ions which do not act as a charge carrier. These ions increase the dielectric strength of the gas and hence the arc is extinguished. This process reduces the pressure of the SF6 gas up to 3kg/cm^2 thus; it is stored in the low-pressure reservoir. This low-pressure gas is pulled back to the high-pressure reservoir for re-use.

Now a day puffer piston pressure is used for generating arc quenching pressure during an opening operation by mean of a piston attached to the moving contacts.

SF6 circuit breakers have the following advantages over conventional breaker