The classification of an electric motor is shown in the figure below. 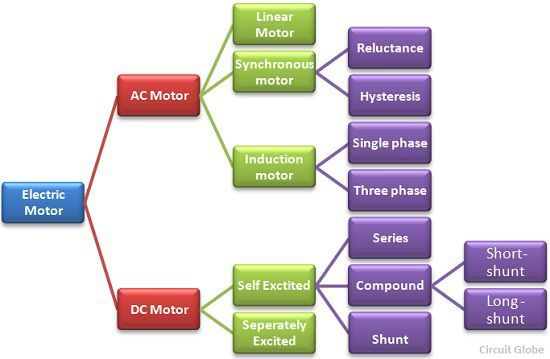 The AC motor converts the alternating current into mechanical power. It is classified into three types; they are the induction motor, synchronous motor, the linear motor. The detail explanation of the motor is expressed below.

The machine which never runs at synchronous speed is called the induction or asynchronous motor. This motor uses electromagnetic induction phenomenon for transforming the electric power into mechanical power. According to the construction of rotor, there are two types of an induction motor. Namely squirrel cage induction motor and phase wound induction motor. 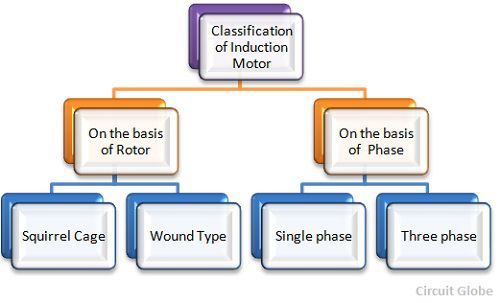 The motor which produces the linear force instead of the rotational force is known as a linear motor. This motor has unrolled rotor and stator. Such type of motor is used on sliding doors and in actuators.

The synchronous speed is measured regarding the rotation of the magnetic field, and it depends on the frequency and the poles of the motor. The synchronous motor is classified into two types they are reluctance and the hysteresis motor.

A machine that converts the DC electrical power into mechanical power is known as DC motor. Its work depends on the basic principle that when a current carrying conductor is placed in a magnetic field, then a force exerted on it, and torque develops. The DC motor is classified into two types, i.e., the self-excited motor and separately excited.

The motor in which the DC winding is excited by the separate DC source is known as the separately excited dc motor. With the help of the separate source, the armature winding of the motor is energised and produce flux.

By the connection of field winding the Self-excited DC motor is further classified into three types. They are the series, shunt and compound wound DC motor.

Apart from the above mention motors, there are various other types of the special machine which have additional features like stepper motor, AC and DC servo motor, etc.