Definition: The Piezoelectric transducer is an electroacoustic transducer use for conversion of pressure or mechanical stress into an alternating electrical force. It is used for measuring the physical quantity like force, pressure, stress, etc., which is directly not possible to measure.

The piezo transducer converts the physical quantity into an electrical voltage which is easily measured by analogue and digital meter.

The ceramic material does not have the piezoelectric property. The property is developed on it by special polarizing treatment. The ceramic material has several advantages. It is available in different shapes and sizes. The material has the capability of working at low voltages, and also it can operate at the temperature more than 3000ºC

The EMF develops because of the displacement of the charges. The effect is changeable, i.e. if the varying potential applies to a piezoelectric transducer, it will change the dimension of the material or deform it. This effect is known as the piezoelectric effect.

The pressure is applied to the crystals with the help of the force summing devices for examples the stress is applied through mechanical pressure gauges and pressure sensors, etc. The deformation induces the EMF which determines the value of applied pressure.

A piezoelectric crystal is shown in the figure below.

The polarity of the charge depends on the direction of the applies forces.

Where, d – charge sensitivity of the crystals
F – applied force in Newton

The force changes the thickness of the crystals.

The young modulus is, 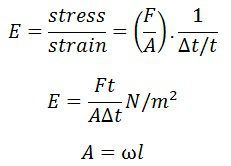 On substituting the value of force in the equation of charge, we get

The output voltage is obtained because of the electrode charges.

The g is the voltage sensitivity of the crystals.

The voltage sensitivity of the crystals is expressed by the ratio of the electric field intensity and pressure.

When the mechanical deformation occurs in the crystals, it generates charges. And this charge develops the voltages across the electrodes.

Modes of Operation of Piezo-Electric Crystal

The Piezoelectric crystals are used in many modes likes, thickness shear, face shear, thickness expansion, Transverse expansion, etc. The figure of the fear shear is shown in the figure below. 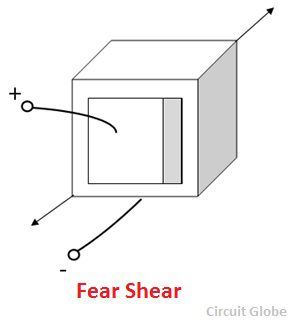 The following are the properties of the Piezoelectric Crystals.

The following are the uses of the Piezoelectric transducers.

The transducer has low output, and hence external circuit is associated with it.