Where V is the voltage in volts, I is the current in amperes, R is the resistance offered by the powered devices, T is the time in seconds and the P is the power measured in watts.

The unit of electrical power is Watt.

Thus, the power consumed in an electrical circuit is said to one watt if one ampere current flows through the circuit when a potential difference of 1 volt is applied across it.The bigger unit of electrical power is the kilowatt (kW), it is usually used in the power system

Types of an Electric Power

The electrical power is mainly classified into two types. They are the DC power and the AC power.

The DC power is defined as the product of the voltage and current. It is produced by the fuel cell, battery and generator. 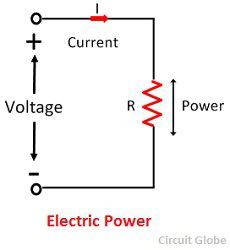 The AC power is mainly classified into three types. They are the apparent power, active power and real power.

1. Apparent Power – The apparent power is the useless power or idle power. It is represented by the symbol S, and their SI unit is volt-amp.

2. Active Power – The active power (P) is the real power which is dissipated in the circuit resistance.

3. Reactive Power – The power developed in the circuit reactance is called reactive power (Q). It is measured in volt-ampere reactive.

The relation between the apparent, active and reactive power is shown below.

The ratio of the real to the apparent power is called power factor, and their value lies between 0 and 1.