The electric traction services can be broadly classified as

The electric traction services are explained below in details.

Main-Line Trains – In such type of train the power supplies to the motor in two ways, i.e., either from an overhead line in an electric locomotive or through diesel generator set in a diesel locomotive. 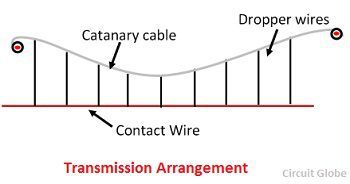 Suburban Trains – The suburban trains are used for travelling at small distances. This train is also known as the local train.The suburban train has a consecutive stop at a much smaller distance. This train consists motorised coaches for increasing the ratio of the weight on driving wheels and a total weight of the train due to which the acceleration and de-acceleration of the train increase.

The each motor coach is equipped with electric drive and pantograph collector. The usual pattern for using the power and unmotorised coaches is in the ratio of 1:2. For high powered train, the ratio may be increased from 1:1. The train which uses motorise coach and trailer coach is also known as electrical multiple unit (EMU) train.The power supply for the suburban train is similar to that of the main train except in an underground train.

Such type of drive usually consists single motor driven coach. It takes the supply from the low-voltage DC overhead line which is running along the roadside. As the current is generally small, the collector consists of a rod carrying at its end a grooved wheel or two rods bridged by a contact bow.The collector system is provided with enough flexibility, and it also provided an additional conductor for the return of current. 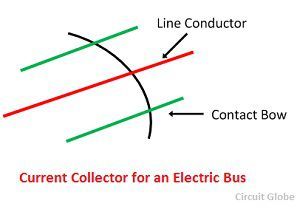 The trams are electric buses which run on rails, and it consists a single motor coach. Sometimes, two or more unmotorised or trailer coaches are added. Their current collection system is similar to buses, and its return can be through one of the rails. The trams run on rails, and their path through road is fixed.

Electric trolleys are used for transporting material in mines and factories. It is mostly run on rails. They are similar to trams; only the shape is different.

The important features of the electric traction drives are explained below.

Duty Cycle of an electricTraction Drives

The duty cycle of traction drive is explained below with the help of speed-time curve and power torque time diagram. Consider the drive travel between two consecutive stations on a level track. The train is accelerated at the maximum possible torque, and the power increases linearly with speed. 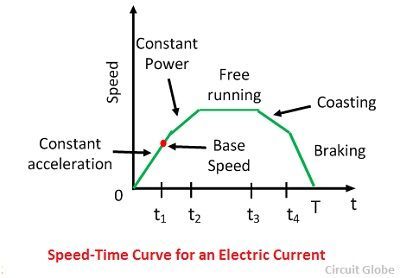 From t2 and t3 train runs at a constant speed and constant drive power. This duration is known as free running. At the suitable time t4, the brake is applied to stop the train at the next station.