Definition: The DC motor drive is a type of amplifier or power modulator that integrate between the controller and a DC motor. It takes the low current and then converts it into a high current which is appropriate for the motor. The DC motor drive also provides the high current torque, 400 % more than the rated continuous torque. The important applications of DC motor drives are rolling mills, paper mills, mine winders, hoists, machine tools, traction, printing presses, textile mills, excavators and crane. 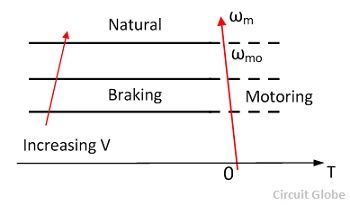 In dynamic braking, the rotation of the arm causes braking. The motor armature disconnects from the source and connects across a resistance. The figure of a separately excited DC series motor is shown in the figure below.

The series machine works as a self-excited generator, and the field connection reverses so that the field assist the residual magnetism. The curve shown below shows the speed torque curve and transition from motoring to braking. 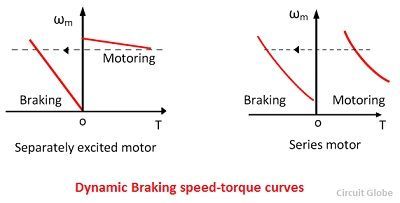 In plugging the braking is done by reversing the supply voltage of a separately excited motor. So that, the motor assists the back emf in forcing armature current in the reverse direction. Resistance is also connected in series with the armature to limit the current.The plugging gives fast braking as compared to generative and dynamic braking.

The speed of the DC motor drives can be control by any of the following methods.

This method prefers because it has high efficiency, good transient response and good speed regulation. It provides speed control only below the rated speed because the armature voltage cannot be allowed to exceed the rated value. 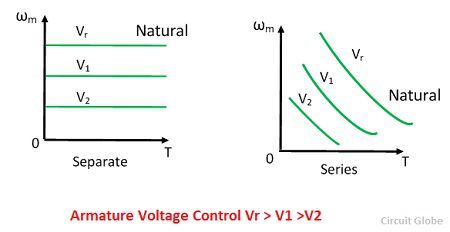 This method is used for controlling the speed above the rated value. Normally, the maximum speed of the motor is twice the rated speed, and in the special motor, it is six times the rated speed.

In this method, the speed is varied by wasting power in external resistor that is connected in series with the armature. This method is mainly used in alternate load application where the duration of low-speed operation forms only a small portion of the total running time.

Armature voltage control has replaced this method in various applications.