The initial resistance of the supply is zero, and hence large current flows through the motor, which damages the windings of the motor. For reducing the flow of starting current, the different starting methods are used. These methods keep the magnitude of starting current within a prescribed limit such that it does not cause the overheating.

The methods employed for starting motors are:

The starting methods are explained below in details.

In this method, an induction motor designed to operate normally with delta connection is connected in a star during starting. Thus the stator voltage and current are reduced by 1/√3. The motor torque is proportional to stator terminal voltage, starting torque is reduced to one-third.

A circuit diagram for a star-delta starter is shown in the figure below. The circuit breaker CBm and CBs are closed to start the machine with star connection. When the steady state speed is reached, CBs is opened, and CBr is closed to connect the machine in Delta. 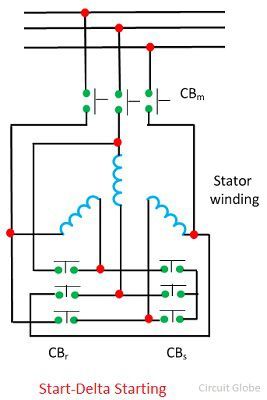 In the starting, the CBs1 and CBs2 are closed, and CBm is open. When the motor accelerates at its full speed, the CBs2 is opened, and CBm closed. Now CB1 is opened to disconnect auto-transformer from the supply.

The starting current is reduced by connecting the three phase reactor in series with the starter. When the motor reaches its steady state, the reactor is removed from the circuit. The reactor starter circuit is shown in the figure below. 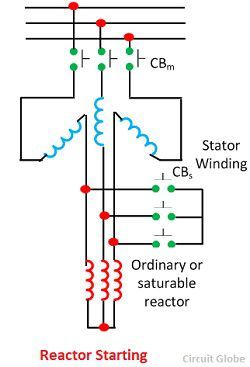 The circuit breaker CBs is closed to start the machine. When the motor reaches its full speed, the CBs is closed to introduce the reactor at the neutral end of the stator winding. Thus, the starting current of the motor is reduced to its minimum value.

Some squirrel cage motors have two or more stator windings, and these windings are connected in parallel during the normal operation. During starting only one winding is connected, which increases the starter impedance and reduces the starting current. This starting scheme is called part winding starting. The machine starts with winding 1 when the CBm is closed and after the full speed is reached the CBs is closed to connect winding 2. 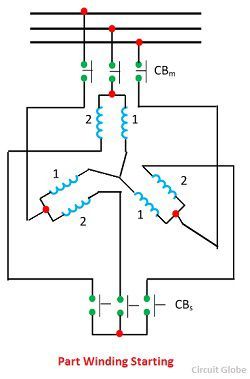 As the motor accelerates the external resistance are cut one by one by closing contacts and hence the rotor current is limited between specified maximum and minimum value.