The current limiting reactor is an inductive coil having a large inductive reactances in comparison to their resistance and is used for limiting short circuit currents during fault conditions. Current-voltage reactors also reduced the voltage disturbances on the rest of the system. It is installed in feeders and ties, in generators leads, and between bus sections, for reducing the magnitude of short circuit currents and the effect of the respective voltage disturbance.

The iron-cored reactor produces hysteresis and eddy current loss due to which more power is consumed as compared to air cored reactor. Normally, in an air cored reactor, the total losses are of the order of  5% of KVA rating of the reactor.

The main drawbacks of the current limiting reactors are as follows

Reactors are located at different location in a power system for reducing the short circuit current. These reactors may be connected in series with the generators, feeders or in bus-bars as explained below. 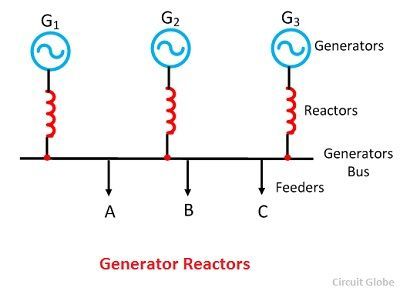 Reactors, which is connected in series with the feeder is called feeders reactor.  When the fault occurs on any one feeder, then the voltage drops occur only in its reactors and the bus bar is not affected much. Hence the machines continue to supply the load. The other advantage is that the fault occurs on a feeder will not affect the others feeders, and thus the effects of fault are localized. 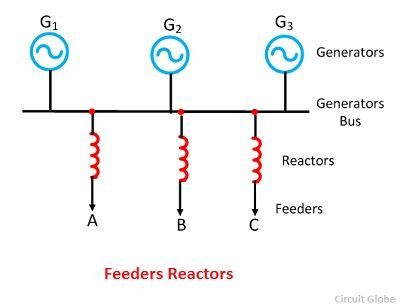 The disadvantage of such type of reactors is that it does not provide any protection to the generators against short circuit faults occurs across the bus bars. Also, there is a constant voltage drop and constant power loss in reactors during normal operating conditions.

Bus-bar reactors are used to tie together the separate bus sections. In this system sections are made of generators and feeders and these sections are connected to each other to a common bus bar.  In such type of system normally one feeder is fed from one generator. In normal operating conditions a small amount of power flows through the reactors. Therefore voltage drop and the power loss in the reactor is low. The bus bar reactor, therefore, made with high ohmic resistance so that there is not much voltage drop across it. 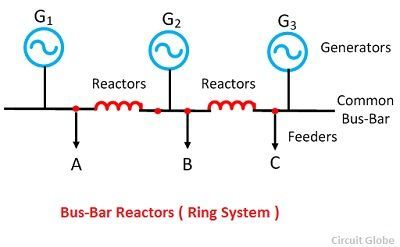 When the fault occurs on any one feeders, only one generator feeds the fault while the current of the other generator is limited because of the presence of the bus-bar reactors. The heavy current and voltage disturbances caused by a short circuit on a bus section are reduced and restricted to that faulty section only. The only drawback of such type of reactor is that it does not protect the generators connected to the faulty sections.

This is the modification of the above system. In tie-bus system, the generator is connected to the common bus-bar through the reactors, and the feeder is fed from generator side. 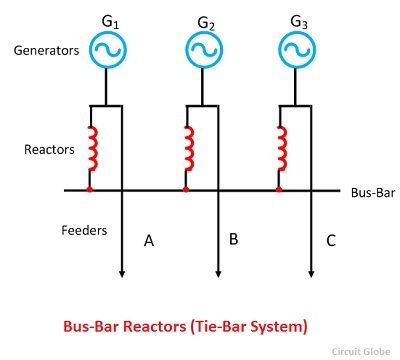 The operation of the system is similar to the ring system, but it has got additional advantages.In this system, if the number of sections is increased, the fault current will not exceed a certain value, which is fixed by the size of the individual reactors.