Definition: The transformer which is used for converting the three-phase quantities into the single phase quantity is known as the summation transformer. This transformer is mainly employed for the unbalanced condition in the system and due to fault condition so that the relay operates properly. 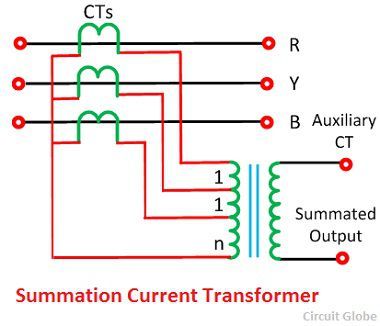 The summation transformers are used for comparing the relaying quantities derived from the current in the three phases of the primary circuit. It converts the three phase system into positive, negative and zero sequence components.

The simple arrangement of the phase sequence current segregating network is shown in the figure below. The summated output will be according to the fault condition. The summated transformer have their limitations because of loss of discrimination due to condensation of information. 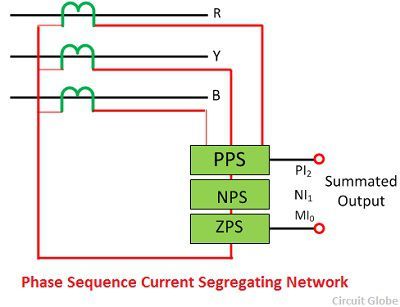 The output amperes-turns from summation transformer may be expressed regarding symmetrical components in the form of MI0 + NI1 + PI2 where M, N and P depend on the choice of summated quantities. The ratio of the compared quantities, for example, at the end of a protected feeder say A and B is

The values of M, N and P depends on the summation transformer and the phase affected by the fault. The ideal condition assumes that the current transducers are linear in response and so also the summation devices. The summation device has less burden and also very simple as compared to sequence network filters.