Definition: The relay is the device that open or closes the contacts to cause the operation of the other electric control. It detects the intolerable or undesirable condition with an assigned area and gives the commands to the circuit breaker to disconnect the affected area. Thus protects the system from damage. 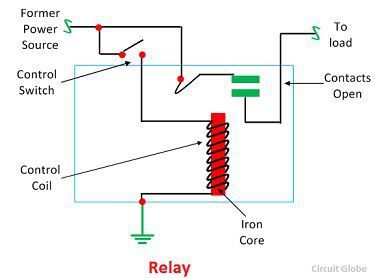 The inner section of the relay is shown in the figure below. It has an iron core which is wound by a control coil. The power supply is given to the coil through the contacts of the load and the control switch. The current flows through the coil produces the magnetic field around it.

Due to this magnetic field, the upper arm of the magnet attracts the lower arm. Hence close the circuit, which makes the current flow through the load. If the contact is already closed, then it moves oppositely and hence open the contacts.

The relay operates both electrically and mechanically. It consists electromagnetic and sets of contacts which perform the operation of the switching. The construction of relay is mainly classified into four groups. They are the contacts, bearings, electromechanical design, terminations and housing.

Terminations and Housing – The assembly of an armature with the magnet and the base is made with the help of spring. The spring is insulated from the armature by moulded blocks which provide dimensional stability. The fixed contacts are usually spot welded on the terminal link.