Definition: Electromagnetic relays are those relay which operates on the principle of electromagnetic attraction. It is a type of a magnetic switch which uses the magnet for creating a magnetic field. The magnetic field then uses for opening and closing the switch and for performing the mechanical operation.

Types of an Electromagnetic Relay

By their working principle, the electromagnetic relay is mainly classified into two types. These are

In this relay, the armature is attracted to the pole of a magnet. The electromagnetic force exerted on the moving element is proportional to the square of the current flow through the coil. This relay responds to both the alternating and direct current.

For AC quantity the electromagnetic force developed is given as

The difficulty of a double frequency supply is overcome by splitting the flux developing in the electromagnetic relay. These fluxes were acting simultaneously but differ in time phase. Thus the resulting deflecting force is always positive and constant. The splitting of fluxes is achieved by using the electromagnet having a phase shifting networks or by putting shading rings on the poles of an electromagnet.

The electromagnetic attraction relay is the simplest type of relay which includes a plunger (or solenoid), hinged armature, rotating armature (or balanced) and moving iron polarised relay. All these relays are shown below.

a. Balanced Beam Relay – In such type of relay two quantities are compared because the electromagnetic force developed varies as the square of the ampere-turn. The ratio of an operating current for such relay is low. If the relay is set for fast operation, then it will tend to overreach on a fast operation.

b. Hinged armature relay – The sensitivity of the relay can be increased for DC operation by adding the permanent magnet. This relay is also known as the polarised moving relay. 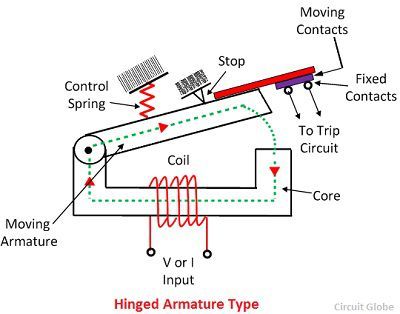 The electromagnetic relay operates on the principle of a split-phase induction motor. The initial force is developed on the moving element that may be disc or another form of the rotor of the non-magnetic moving element. The force is developed by the interaction of electromagnetic fluxes with eddy current, that is induced in the rotor by these fluxes.

The different type of structure has been used for obtaining the phase difference in the fluxes. These structures are

This coil is usually energised by current flowing in the single coil wound on a magnetic structure containing an air gap. The air-gap fluxes produce by the initializing current is split into two flux displace in time-space and by a shaded ring. The shaded ring is made up of the copper ring that encircles the part of the pole face of each pole.

The disc is made up of aluminium. The inertia of the aluminium disc is very less.. Hence they need less deflecting torque for its movement. The two rings have the current induced in them by the alternating flux of the electromagnetic. The magnetic field develops from the current produces the flux in the portion of the iron ring surrounded by the ring to lag in phase by 40° to 50° behind the flux in the unshaded portion of the pole. 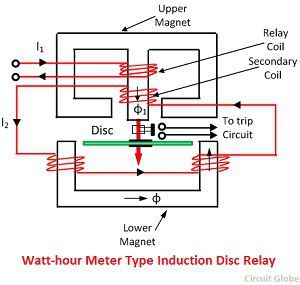 The primary winding carries relay current I1 while the secondary current induces the emf in the secondary and so circulate the current I2 in it. The flux φ1 induces in the E shed magnet, and the flux φ induces in the U-shaped magnet. These fluxes induced in the upper and lower magnetic differs in phase by angle θ which will develop a driving torque on the disc proportional to φ1φ sinθ.

The relay which works on the principle of electromagnetic induction is known as the induction cup relay. The relay has two or more electromagnet which is energized by the relay coil. The static iron core is placed between the electromagnet as shown in the figure below. 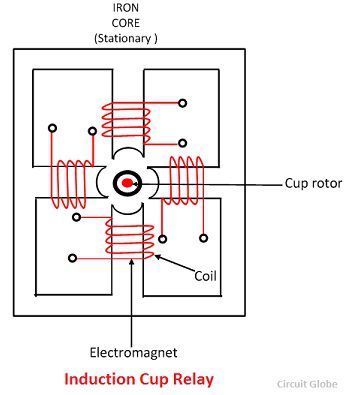 The more torque is produced in the induction cup relay as compared to the shaded and watt meter type relay. The relay is fast in operation and their operating time is very less approximately 0.01 sec.