V1 be applied to a transformer, the secondary of which is an open circuit. Here α the angle of the voltage sinusoid at t = 0. Suppose the core loss and primary resistance be neglected, then

Where T1 is the number of turns and Φ is the flux in the core. In the steady state

Integration of the equation (5) gives

Where Φc is the constant or integration to be found from an initial condition at t = 0. Considered that when the transformer is last disconnected from the supply line, a small residual flux Φr remained in the core. Thus, at t = 0, Φ = Φr.

Substituting this value in equation (6) we get 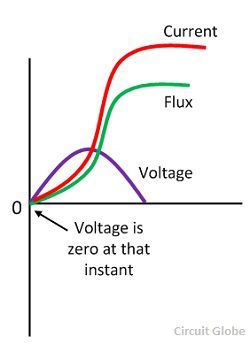 Sometimes the RMS value of magnetising current is larger than the primary rated current of the transformer. This current may produce an electromagnetic force which is about twenty-five times the normal value. Therefore the winding of the transformer is strongly braced. The improper operation of protective devices like unwarranted tripping of relays, momentary large voltage drops and large humming due to magnetostriction of the core.

To obtain no transient inrush current, Φc should be zero.

In other words, if the transformer is connected to the supply line near a positive or negative maximum voltage, the inrush current will be minimised. But usually, it is impractical to connect a transformer at a predetermined time in the voltage cycle