When an electrical current passes through the body, the nervous system experience an electric shock. The intensity of the shock depends mainly on the strength of the current and the path taken by the current through the body and the duration of contact. In extreme cases the shock causes the failure of the normal action of the heart and lungs, resulting in unconsciousness or death.

It is believed that the current below 5mA are not dangerous. The current between 10 to 20 MA current is dangerous because the sufferer loses muscular control. The resistance of human body taken between two hands or between and legs ranges 500mA to 50kΩ. If the resistance of the human body has assumed as 20kΩ, then a contact with 230 volt supply can be potentially fatal, 230/20,000 = 11.5 mA. 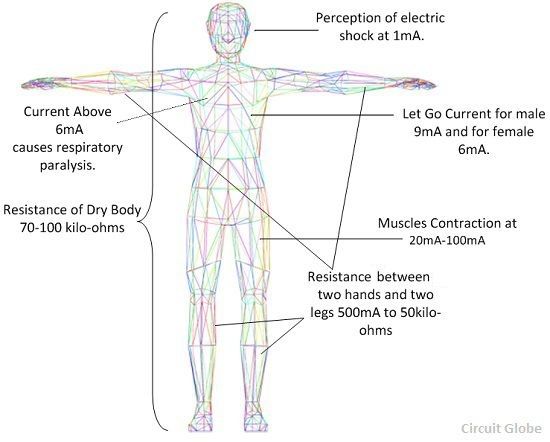 The leakage current I = E / R, where E is the supply voltage and R the body resistance. The resistance of dry body varies from 70kΩ to 100 kΩ per square cm, but when the human body is wet, it reduces enormously to between 700Ω to1000Ω per square cm. (The skin resistance of the body is high, but external resistance is low).

The following are the effect of current passing from hand-to-hand and foot to foot.

If the current exceeds 100mA, then the accident could be deadly because the pumping action of the heart stops and pulse disappears. Once the heart stops pumping the brains began to die and after it is robbed of oxygenated blood.At the very high current of the order of 6mA and above, there is a danger of respiratory paralysis and burns.

The shock experienced through AC and DC may vary in their effects. The AC at reasonable frequencies (25-60c/s) is more dangerous than DC of the same RMS.

The increasing use of high-frequency equipment added danger arises from the passage of high-frequency current through the body. At a frequency of about 100c/s, the sensation of shock begins to disappear. The serious internal burns may prove dangerous. It is the current which kills.

An alteration voltage of 50v might produce a dangerous 50mA current. The people have survived much higher voltage due to various factors. The contact resistance can be significantly increased by dry skin, cleaning of clothes and the wearing of boots.

2 thoughts on “Effects of Electric Current on Human Body”