The synchronous motor uses the salient pole rotor. The word salient means the poles of the rotor projected towards the armature windings. The rotor of the synchronous motor is made with the laminations of the steel. The laminations reduce the eddy current loss that occurs on the winding of the transformer. The salient pole rotor is mostly used for designing the medium and low-speed motor. For obtaining the high-speed cylindrical rotor is used in the motor.

The stator and rotor are the two main parts of the synchronous motor. The stator is the stationary part, and the rotor is the rotating part of the machine. The three-phase AC supply is given to the stator of the motor.

The stator and rotor both are excited separately. The excitation is the process of inducing the magnetic field on the parts of the motor with the help of an electric current.

When the rotor and stator both have the same pole on the same side, they repel each other. If they have opposite poles, they attract each other. This can easily be understood with the help of the figure shown below: 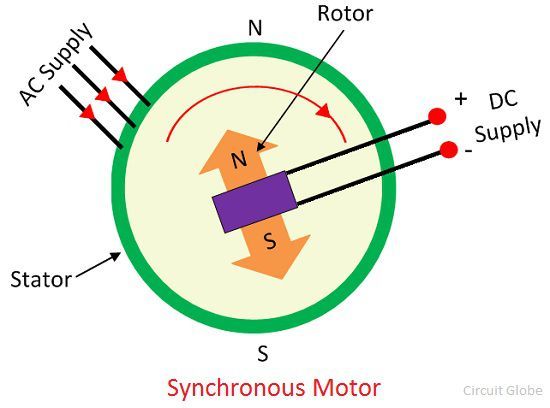 The rotor attracts towards the pole of the stator for the first half cycle of the supply and repels for the second half cycle. Thus the rotor becomes pulsated only at one place. This is the reason because of which the synchronous motor is not self-starting. 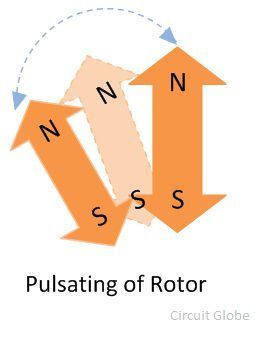 When the rotor starts rotating at its synchronous speed, the prime mover is disconnected from the motor. And the DC supply is provided to the rotor because of which the north and south pole develops at their ends

The synchronous motor can also be started with the help of the damper windings.