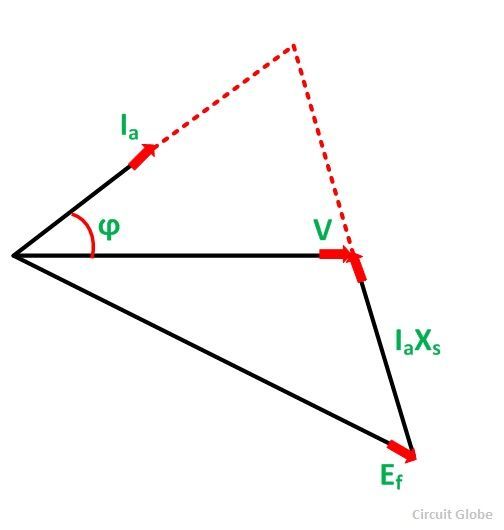 The load on the shaft is increased. The rotor slows down momentarily, as it required some time to take increased power from the line. In another word, it can be said that even if the rotor is rotating at synchronous speed, the rotor slips back in space because of the increase in the load. In this process, the torque angle δ becomes larger, and, as a result, the induced torque increases.

The induced torque equation is given as:

Then increased torque increases the rotor speed, and the motor again regains the synchronous speed, but with the larger torque angle. The excitation voltage Ef is proportional to ϕω, it depends upon the field current and the speed of the motor. Since the motor is moving at a synchronous speed, and the field current is also constant. Hence, the magnitude of the Voltage |Ef| remains constant. We have,

From the above equations, it is clear, that if P is increased the value of Ef sinδ and Ia cosϕ also increases.

The figure below shows the effect of an increase in load on the operation of a synchronous motor. 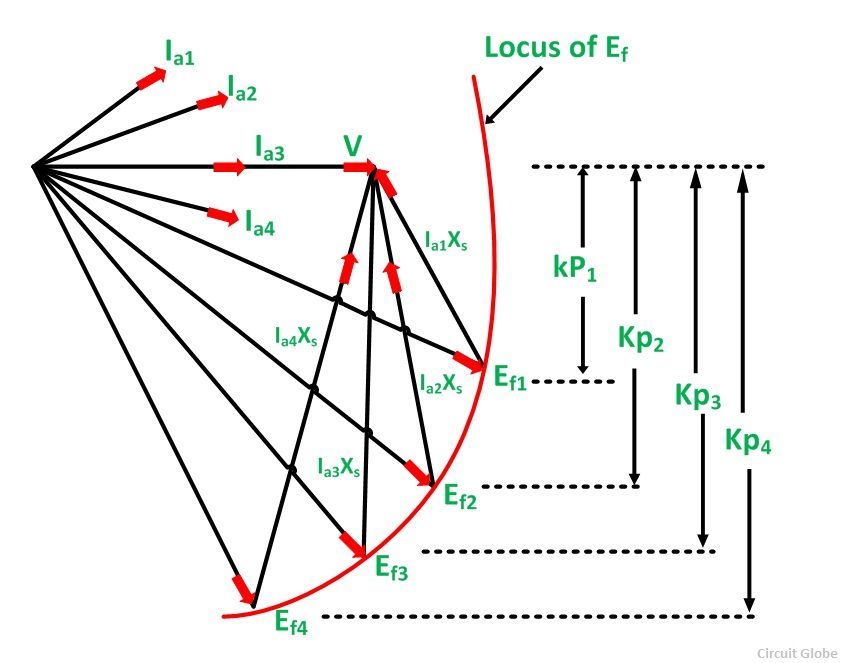 It is seen from the above figure that with the increase in load, the quantity jIaXs goes on increasing and the relation V = Ef + jIaXs is satisfied. The armature current is also increased. The power factor angle also changes with the change in load. It becomes less and less leading and then becomes more and more lagging as shown in the figure above.

Thus, if the load on a synchronous motor is increased the following points are considered which are given below.

There is a limit to the mechanical load that can be applied to a synchronous motor. As the load is increased, the torque angle δ also increases until the condition arises when the rotor is pulled out of synchronism and the motor is stopped.

Pull-out torque is defined as the maximum value of the torque which a synchronous motor can develop at rated voltage and frequency without losing synchronism. Its values vary from 1.5 to 3.5 times the full load torque.

4 thoughts on “Effect of Load on a Synchronous Motor”