The instrument used for measuring the physical and electrical quantities is known as the measuring instrument. The term measurement means the comparison between the two quantities of the same unit. The magnitude of one of the quantity is unknown, and it is compared with the predefined value. The result of the comparison obtained regarding numerical value. 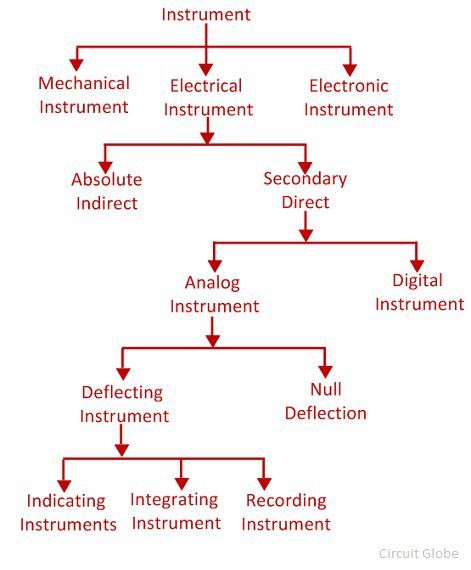 In this article, we discuss the different types of electrical instrument.

The tangent galvanometer is the examples of the absolute instruments. In tangent galvanometer, the magnitude of current passes through the coil determines by the tangent of the angle of deflection of their coil, the horizontal component of the earth magnetic field, radius and the number of turns of wire used. The most common applications of this type of instrument are found in laboratories.

In the secondary instrument, the deflection shows the magnitude of the measurable quantities. The calibration of the instruments with the standard instrument is essential for the measurement. The output of this type of device is directly obtained, and no mathematical calculation requires for knowing their value.

The digital instrument gives the output in the numeric form. The instrument is more accurate as compared to the analogue instrument because no human error occurs in the reading.

The deflection type instrument is further sub-classified into three types.

The response time of the electronic instrument is very high as compared to the electrical and mechanical device.

9 thoughts on “Classification of Measuring Instruments”