Such type of instrument has high accuracy and also it is very sensitive. For the operation of the null type instrument, the following condition requires.

Consider a null point instruments (i.e., the DC potentiometer) wherein an unknown emf Ex is measured. The slide wire of the potentiometer has been measured regarding emf with the help of standard emf source. The null detector is a current galvanometer whose deflection is proportional to the unbalance emf, i.e., is that the difference between the emf Eab across portion ab of slide wire and the unknown emf Ex. As soon as both are equal. 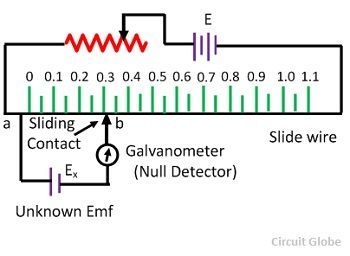 Therefore the unknown emf Ex is equal to Eab which is directly indicated by the measured scale places along the slide wire.

The following are the advantages of the null type instruments.