The construction of the single phase energy meter is shown in the figure below. 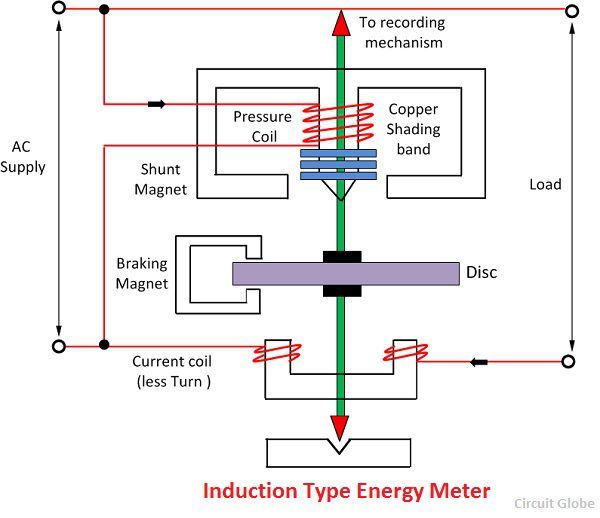 The energy meter has four main parts. They are the

The detail explanation of their parts is written below.

The centre limb of the magnet has the copper band. These bands are adjustable. The main function of the copper band is to align the flux produced by the shunt magnet in such a way that it is exactly perpendicular to the supplied voltage.

2. Moving System – The moving system is the aluminium disc mounted on the shaft of the alloy. The disc is placed in the air gap of the two electromagnets. The eddy current is induced in the disc because of the change of the magnetic field. This eddy current is cut by the magnetic flux. The interaction of the flux and the disc induces the deflecting torque.

When the devices consume power, the aluminium disc starts rotating, and after some number of rotations, the disc displays the unit used by the load. The number of rotations of the disc is counted at particular interval of time. The disc measured the power consumption in kilowatt hours.

This braking torque opposes the movement of the disc, thus reduces their speed. The permanent magnet is adjustable due to which the braking torque is also adjusted by shifting the magnet to the other radial position.

4. Registration (Counting Mechanism) – The main function of the registration or counting mechanism is to record the number of rotations of the aluminium disc. Their rotation is directly proportional to the energy consumed by the loads in the kilowatt hour.

The rotation of the disc is transmitted to the pointers of the different dial for recording the different readings. The reading in kWh is obtained by multiply the number of rotations of the disc with the meter constant. The figure of the dial is shown below. 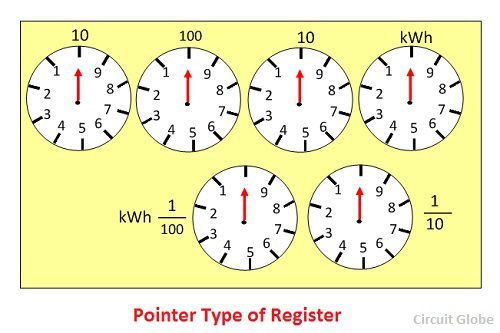 Working of the Energy Meter

The energy meter has the aluminium disc whose rotation determines the power consumption of the load. The disc is placed between the air gap of the series and shunt electromagnet. The shunt magnet has the pressure coil, and the series magnet has the current coil. 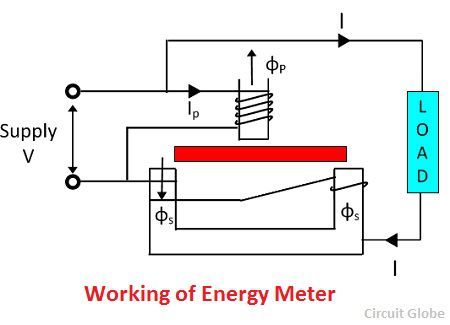 The Ip produces the two Φp which is again divided into Φp1 and Φp2. The major portion of the flux Φp1 passes through the side gap because of low reluctance. The flux Φp2 goes through the disc and induces the driving torque which rotates the aluminium disc.

The flux Φp is proportional to the applied voltage, and it is lagged by an angle of 90º. The flux is alternating and hence induces an eddy current Iep in the disc.

The phasor diagram of the energy meter is shown in the figure below. 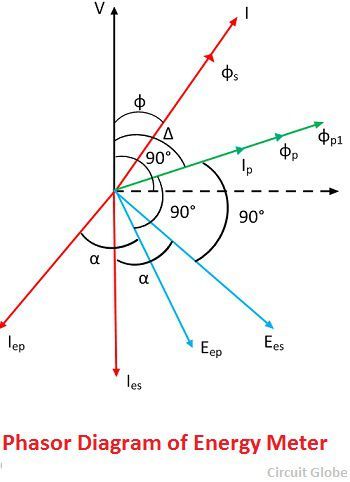 The net driving torque of the dis is expressed as

Φ1 and Φ2 are the phase angle between the fluxes. For energy meter, we take Φp and Φs.

If f, Z and α are constants,

At steady state, the speed of the driving torque is equal to the braking torque.

The speed of the rotation is directly proportional to the power.

The three phase energy meter is used for measuring the large power consumption.