Definition: Creeping in energy meter is the phenomenon in which the aluminium disc rotates continuously when only the voltage is supplied to the pressure coil, and no current flows through the current coil. In other words, the creeping is the kind of error in which the energy meter consumes a very small amount of energy even when no load is attached to the meter.

The creeping increases the speed of the disc even under the light load condition which increases the meter reading. The vibration, stray magnetic field and the extra voltage across the potential coil are also responsible for the creeping.

The creeping error occurs because of the excessive friction. The main driving torque is absent at no load. Hence the disc rotates because of the additional torque provided by the compensating vane.

The creeping is avoided by drilling the hole in the disc. The holes are diametrically opposite to each other. The aluminium disc stops rotating even when the small edge of the disc come under the pole of the magnet. The holes will limit the revolution of the disc.

This action can easily be understood by considering the figure shown below. 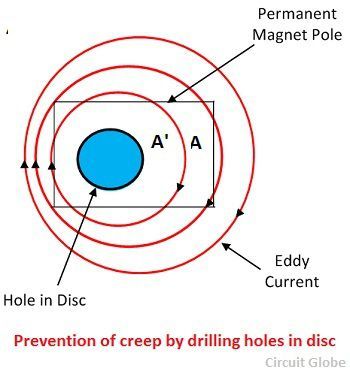 The disc will rotate at no load until the holes reach under the edges of the magnet. Their movement is opposed by the torque produced in this condition.

In some cases, the small piece of iron is attached to the edge of the disc. The force of attraction occurs between the pole magnets and the iron piece, which prevent the creeping of the disc.