The power factor of the transmission line is measured by dividing the product of voltage and current with the power. And the value of voltage current and power is easily determined by the voltmeter, ammeter and wattmeter respectively. This method gives high accuracy, but it takes time.

The power factor meter is of two types. They are

The different types of power factor meter are explained below in details.

The construction of the single phase electrodynamometer is shown in the figure below. The meter has fixed coil which acts as a current coil. This coil is split into two parts and carry the current under test. The magnetic field of the coil is directly proportional to the current flow through the coil. 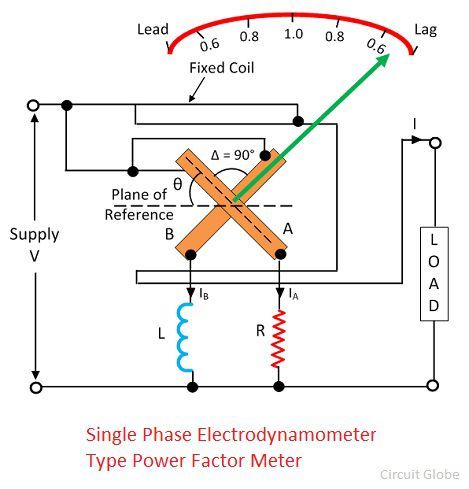 The meter has two deflecting torque one acting on the coil A, and the other is on coil B. The windings are so arranged that they are opposite in directions. The pointer is in equilibrium when the torques are equal.

Deflecting torque acting on the coil A is given as

θ – angular deflection from the plane of reference.
Mmax – maximum value of mutual inductance between the coils.

The deflecting torque acting on coil B is expressed as

The deflecting torque is acting on the clockwise direction.

The value of maximum mutual inductance is same between both the deflecting equations.

This torque acts on anti-clockwise direction. The above equation shows that the deflecting torque is equal to the phase angle of the circuit.

The construction of the three phase meter is shown in the figure below. The electrodynamometer is only useful for the balanced load. The moving coil is placed at an angle of 120º. They are connected across different phases of the supply circuit. Both the coil has a series resistance. 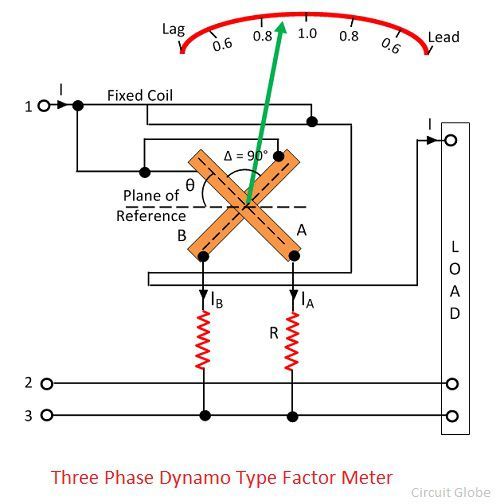 The phasor diagram of the three phase electrodynamic meter is shown in the figure below. 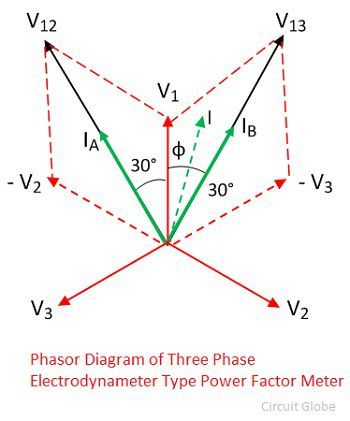 Let  Φ – phase angle of the circuit.
θ – angular deflection from the plane of reference.

Torque acting on coil A is

Torque acting on coil B is

The torque TA and TB are acting on the opposite directions.

Thus the angular deflection of the coil is directly proportional to the phase angle of the circuit.

The moving iron instrument is divided into two categories. They are the rotating magnetic field to some alternating fields.

A. Rotating Field Power factor Meter – The following are the essential feature of the rotating magnetic field. The power factor meter has three fixed coils, and their axes are 120º displaced from each other. The axes are intersecting each other. The coils are connected to the three phase supply with the help of the current transformer. 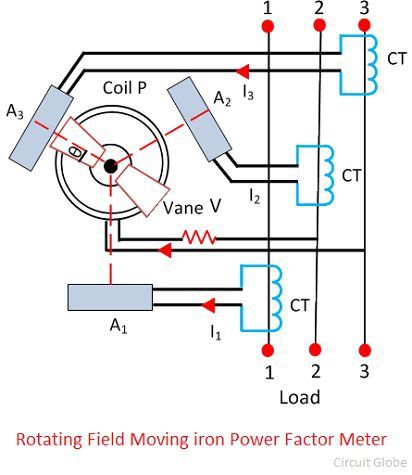 The P is the fixed coil connected in series with the high resistance circuit across the phases 2 and 3. There is an iron cylinder across coil P. The two iron vanes are fixed to the cylinder. The spindles also carry damping vanes and pointer.

The phasor diagram of the power factor meter is shown in the figure. 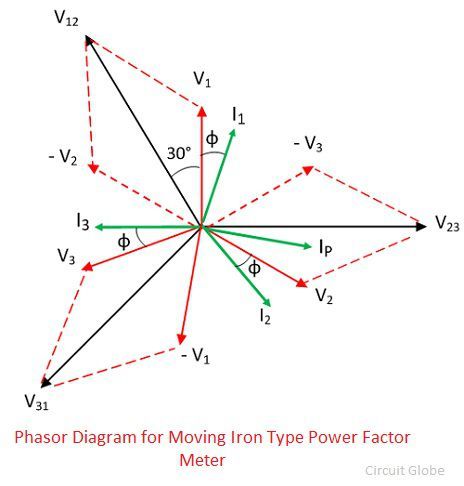 The total torque of the meter is zero for steady state deflection.

The coil P and the iron cylinders generate the alternating flux which interacts with the flux of the fixed coils. The interaction of the coil generates the moving system which determined the phase angle of the current. The vanes of the power factor meter are magnetized by the current of the moving coil which is in phase with the system line voltage.