Definition: The instrument in which the moving iron is used for measuring the flow of current or voltage is known as the moving iron instrument. It works on the principle that the iron place near the magnet attracts towards it. The force of attraction depends on the strength of the magnet field. The magnetic field induces by the electromagnet whose strength depends on the magnitude of the current passes through it.

The plate or vane of soft iron is used as the moving element of the instrument. The vane is so placed that it can freely move in the magnetic field of the stationary coil. The conductor makes the stationary coil, and it is excited by the voltage or current whose magnitude is used to be measured.

The moving iron instrument uses the stationary coil as an electromagnet. The electromagnet is the temporary magnet whose magnetic field strength increases or decreases with the magnitude of the current passes through it.

Working of the Moving Iron Instrument

The electromagnet attracts the iron vane. The vane passes through the coil tries to occupy the minimum reluctance path (the reluctance is the property of the magnet which opposes the flow of electric current).

The vane passes through the coil experience a force of repulsion caused by the electromagnet. The repulsion force increases the strength of the coil inductance.
This happens because the inductance and reluctances are inversely proportional to each other.

Classification of the Moving Iron Instruments

The attraction and the repulsion are the types of the moving iron instruments. Their detail explanation is shown below.

1. Attraction Type – The instrument in which the iron plate attracts from the weaker field towards the stronger field such type of instrument is known as the attraction type instrument. 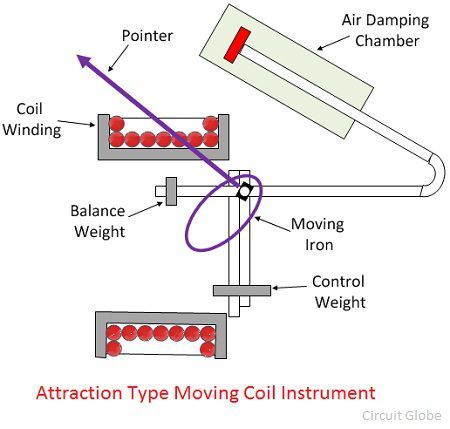 The iron vane deflects from the low magnetic field to the high magnetic field, and the strength of the deflection is directly proportional to the magnitude of the current flow through it. In short, we can say that the iron coil attracts towards in.

The attraction type instruments use spring, which provided the controlling torque. The deflection of the coil is reduced by the aluminium piston which is attached to the moving coil.

2. Repulsion Type Instruments – The repulsion type instrument has two vanes or iron plates. One is fixed, and the other one is movable. The vanes become magnetised when the current passes through the stationary coil and the force of repulsion occur between them. Because of a repulsive force, the moving coil starts moving away from the fixed vane. 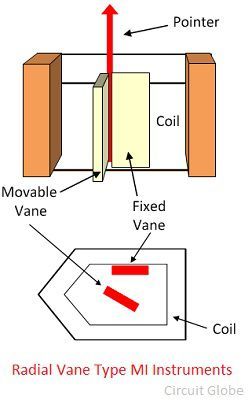 The spring provides the controlling torque. The air friction induces the damping torque, which opposes the movement of the coil. The repulsion type instrument is a non-polarized instrument, i.e., free from the direction of current passes through it. Thus, it is used for both AC and DC.

Advantages of the MI Instruments

The following are the advantages of the moving iron instruments.

The following are the disadvantages of Moving Iron Instrument.