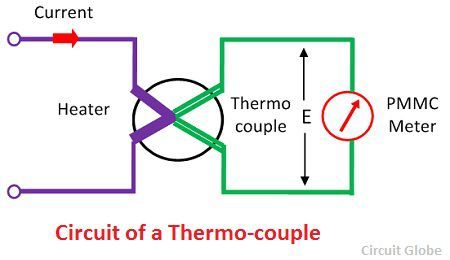 The most significant advantage of the thermocouple instrument is that it is used for high-frequency measurement of current and voltage. The instrument is more accurate for the frequency above 50Hz.

Principle of Operation of Thermoelectric Instrument

The circuit in which thermal emf generates is made of two dissimilar metals. The temperature at their junction is written as

Where the a and b are constant, and their value depends on the properties of metal used in the thermocouple. The approximate value of the a is 40 to 50 microvolt, and that of the b is a few tenths to hundreds of microvolt/C2.

Let = Δθ temperature difference between hot and cold junction. Thus their temperature is expressed as

The value of b is very small as compared to the a and hence it is neglected. The temperature at the junction is expressed as

Thermoelectric element and the indicating instrument are the two main parts of the thermo-electric instrument.

Four types of thermoelectric element are used in the thermocouple instrument. Their types are explained below in details.

1. Contact Type – The contact type element uses the separate heater. The junction of the thermocouple is contacted with the heater shown in the figure below.

The electric heating element is used for the following purposes.

2. Non-contact type Instrument – In this instrument, there is no electrical contact between the heating element and the thermocouple. It is separated by the electrical insulation. The insulation makes the system less sensitive and slow as compared to the contact type instrument.

3. Vacuum Thermo-Element – In the vacuum tube instrument, the heater and the thermocouple are placed in the evacuated glass tube. This vacuum tube increases the efficiency of the instruments because heater remains hot for a long time. 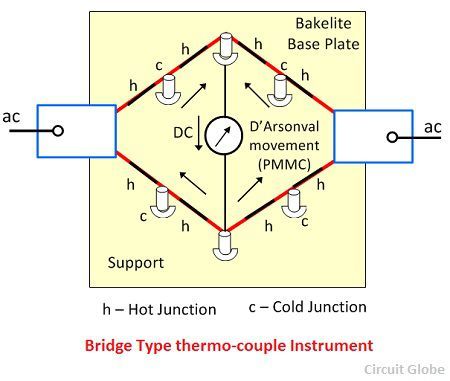 The following are the advantages of thermoelectric Instrument.

The only disadvantage of the thermoelectric instrument is that their overload capacity is less as compared to the other element.