Definition: The instrument which measures the voltage or potential difference in volts is known as the voltmeter. It works on the principle that the torque is generated by the current which induces because of measurand voltage and this torque deflects the pointer of the instrument. The deflection of the pointer is directly proportional to the potential difference between the points. The voltmeter is always connected in parallel with the circuit.

The voltmeter is represented by the alphabet V inside the circle along with the two terminals.

Why is Voltmeter connected in Parallel?

The voltmeter constructs in such a manner that their internal resistance always remains high. If it connects in series with the circuit, it minimises the current which flows because of the measurand voltage. Thus, disturb the reading of the voltmeter. 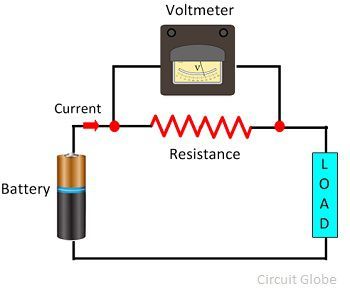 Why Voltmeter has High Resistance?

The voltmeter is constructed with very high internal resistance because it measures the potential difference between the two points of the circuit. The voltmeter does not change the current of the measuring device. 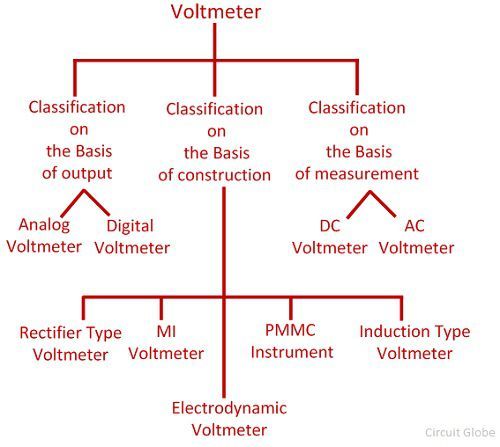 On the basis of the construction, the voltmeter is of the following types.

The electro-dynamometer voltmeter is used for measuring the voltage of both AC and DC circuit. In this type of instruments, the calibration is same both for the AC and DC measurement.

Such type of instrument is used in AC circuits for voltage measurement. The rectifier instrument converts the AC quantity into the DC quantity by the help of the rectifier. And then the DC signal is measured by the PMMC instrument.

The following are the classification of instruments regarding the displays of output reading.

The analogue voltmeter uses for measuring the AC voltage. It displays the reading through the pointer which is fixed on the calibrated scale. The deflection of the pointer depends on the torque acting on it. The magnitude of the develops torque is directly proportional to the measuring voltage.

The instrument which measures the direct current is known as the DC voltmeter, and the AC voltmeter is used in the AC circuit for alternating voltage measurement.