The electronic voltmeter is used for measuring the voltage of direct, RMS and peak voltage of the system. The vacuum tube has many advantages like they have high input impedance, wide frequency range and high sensitivity.

The most significant advantage of the VTM is that it can draw very less current as compared to the other meter. In VTM, the measuring signal is directly supplied to the vacuum tube of the meter. The vacuum tube is amplifying the signal and pass it to the deflecting meter.

The Vacuum Tube Voltmeter is classified into the following types.

The circuit of the diode voltmeter consists the PMMC meter, load resistor, vacuum tube diode. The vacuum tube diode connects in series with resistance raises the strength of the weak signal. Because of the vacuum tube, the system becomes more sensitive than the normal voltmeter.

For obtaining the accurate reading from the voltmeter, it is essential that their current and voltage are directly proportional to each other. This can be done by the help of the series resistor. The circuit diagram of the diode vacuum tube voltmeter is shown in the figure below. 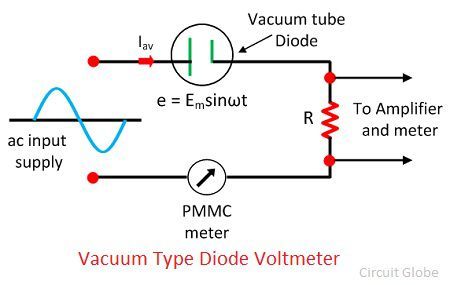 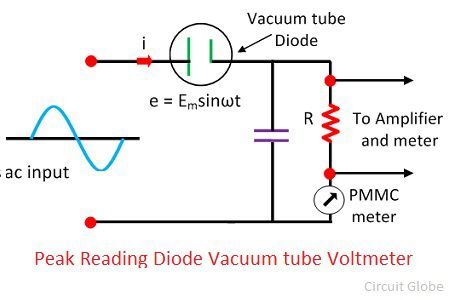 The working of both the series and shunt type voltmeter is almost same. The capacitor becomes charged by the positive peak voltage of the AC supply and its discharge through the shunt resistor because of which their voltage decreases. The voltages rectify by the PMMC meter connected in series with the resistor.  The peak voltage is directly proportional to the rectifier output voltage.

The vacuum tube voltmeter is used in the past for the measurement of voltages. Nowadays it is replaced by the transistor voltmeter (TVM) and the field effect voltmeter (FETVM).