Definition: The CRT is a display screen which produces images in the form of the video signal. It is a type of vacuum tube which displays images when the electron beam through electron guns are strikes on the phosphorescent surface. In other Words, the CRT generates the beams, accelerates it at high velocity and deflect it for creating the images on the phosphorous screen so that the beam becomes visible.

The working of CRT depends on the movement of electrons beams. The electron guns generate sharply focused electrons which are accelerated at high voltage. This high-velocity electron beam when strikes on the fluorescent screen creates luminous spot 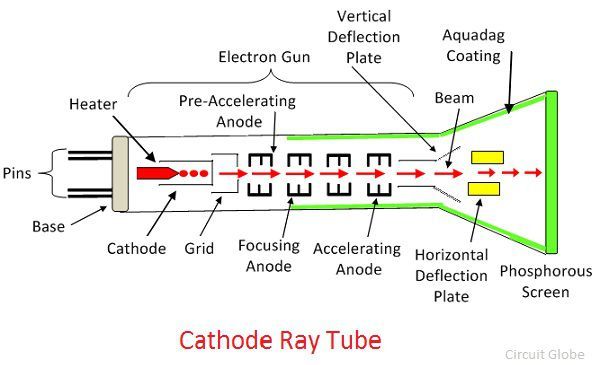 The working parts of a CRT are enclosed in a vacuum glass envelope so that the emitted electron can easily move freely from one end of the tube to the other.

The Electrons Gun Assembly, Deflection Plate Assembly, Fluorescent  Screen,  Glass Envelope, Base are the important parts of the CRT. The electron gun emits the electron beam, and through deflecting plates, it is strikes on the phosphorous screen. The detail explanation of their parts is explained below.

The beam is focused by focusing anode. The accelerating and focusing electrodes are cylindrical in shape which has a small opening in the centre of each electrode. After exiting the focusing anode, the beams passes through the vertical and horizontal deflecting plates.

The front of the CRT is called the face plate. The face plate of the CRT is made up of entirely fibre optics which has special characteristics. The internal surface of the faceplate is coated with the phosphor. The phosphorous converts the electrical energy into light energy. The energy level of the phosphorous crystal raises when the electron beams strike on it. This phenomenon is called cathodoluminescence.

The light which is emitted through phosphorous excitation is called fluorescence. When the electron beam stop, the phosphorous crystal regain their original position and release a quantum of light energy which is called phosphorescence or persistence.

The Aquadag is the aqueous solution of graphite which is connected to the secondary of the anode. The Aquadag collects the secondary emitted electrons which are necessary for keeping the CRT screen in the state of electrical equilibrium.