Anode and Cathode are the two classifications in which electrodes are classified. The significant difference between anode and cathode is that at anode oxidation takes place. As against, at the cathode, reduction occurs.

What is an Electrode?

A crucial component of an electrochemical cell that makes contact with electrolyte is known as an electrode. Electrode acts as a metallic contact through which the current enters and leaves the electrolyte. More specifically, we can say, it is regarded as a surface where a redox reaction takes place between the metal and the solution.

Electrode generally represents an electrical conductor/ semiconductor within the electrochemical cell. It specifies the conductive phase where the transfer of charged carriers takes place.

An anode is a type of electrode that can be of either positive polarity or negative polarity depending upon the type of cell. However, the anode is specifically defined as the electrode where oxidation i.e., loss of electrons takes place.

It is to be noted here that one can never define anode specifically as positive or negative in general as its polarity shows dependency on the type of cell.

Similar to an anode, a cathode can hold positive as well as negative charge depending upon cell type. For the cathode, it is said that it is an electrode where reduction i.e., the gain of electrons takes place.

Just like an anode, even a cathode can also be not defined according to its positive or negative polarity but the occurrence of reduction at an electrode implies that it is the cathode.

Key Differences Between Anode and Cathode

Consider a galvanic cell arrangement shown below in order to understand how the flow of current through the solution takes place. 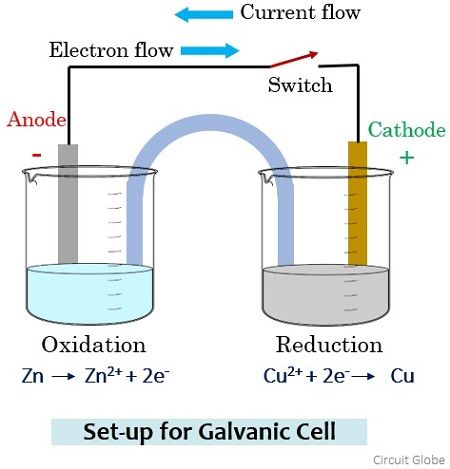 Here in the two separate beakers, we have copper sulphate and zinc sulphate solution. To maintain electric contact between the two solutions a salt bridge containing potassium chloride is used. The two electrodes of zinc and copper that will act as anode and cathode are connected by a metallic wire through a switch.

During the open condition of the switch, due to the open circuit arrangement, no reaction will occur in any of the beakers and so there will be no flow of current through the wire. Further, the switch is in the on state and we will get the closed-circuit arrangement then the electrons from the Zn electrode migrate (oxidation) through the salt bridge and get reduced at the Cu electrode (reduction). 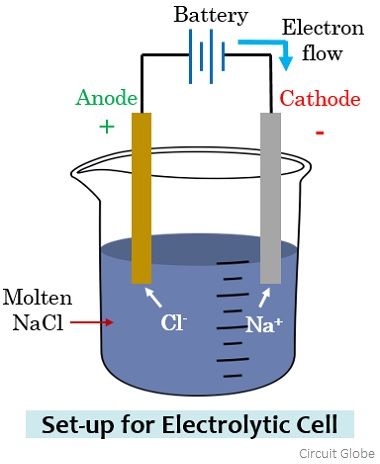 It is to be noted here that as electrons are moving from cathode to anode here thus the direction of the flow of current will be from anode towards the cathode.

The flow of current through molten sodium chloride leads to its decomposition into its elements i.e., sodium metal and chlorine gas.

2 thoughts on “Difference Between Anode and Cathode”