The symbolic representation of Zener diode is shown in the figure below. 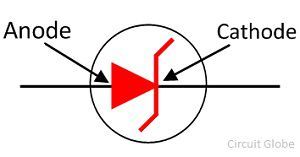 The circuit diagram of the Zener diode is shown in the figure below. The Zener diode is employed in reverse biasing. The reverse biasing means the n-type material of the diode is connected to the positive terminal of the supply and the P-type material is connected to the negative terminal of the supply. The depletion region of the diode is very thin because it is made of the heavily doped semiconductor material. 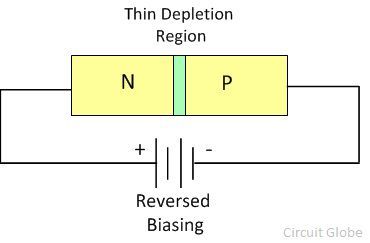 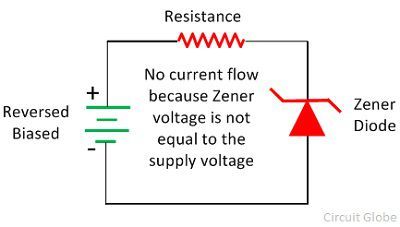 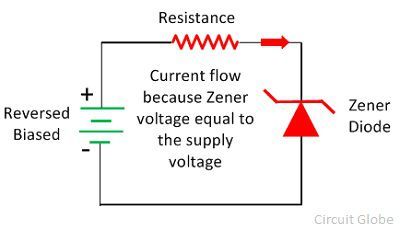 The reverse bias applies across the diode increases the intensity of electric field across the depletion region. Thus, it allows the electrons to move from the valence band of P-type material to the conduction band of N-type material. This transferring of valence band electrons to the conduction band reduces the barrier between the p and n-type material. When the depletion region become completely vanish the diode starts conducting in the reverse biased. 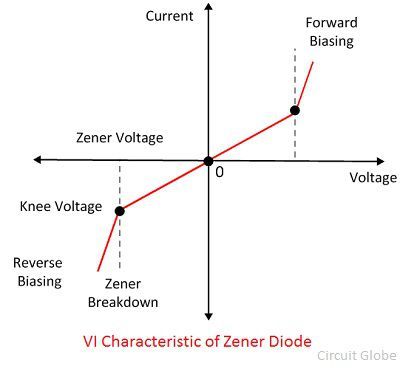 At Zener breakdown voltage the current starts flowing in the reverse direction. The graph of the Zener breakdown is not exactly vertical shown above which shows that the Zener diode has resistance. The voltage across the Zener is represented by the equation shown below.

For Meter Protection – The Zener diode is generally used in multimeters for controlling the movement of the meter against accidental overloads. It is connected in parallel with the diode. When the overload occurs across the diode most of the current pass through the diode. Thus, protects the meter from damage.

For Wave Shaping – The Zener diode is used for converting the sine wave into the square wave.This can be done by placing the two Zener Diodes in series with the resistance. The diode is connected back to back and in the opposite direction.

When the voltage applied across the terminal is less than the Zener voltage the diodes offer a high resistive path to the current and the input voltage applied across a diode appeared at the output terminal. When the voltage rises beyond the Zener voltage they offer a low resistance path and large current flow through the diode. Due to which the heavy voltage drop occurs across the resistance and the input wave cutoff at the peak. Thus, the square wave appears across the output terminal