Zener diodes find wide applications commercially and industrially. Some of the important applications of a Zener Diodes are as a Voltage Regulator or Stabilizer, as a Meter Protector and as a Wave-Shaper. They are discussed below in detail.

As a Voltage Stabilizer

The major application of a Zener diode in the electronic circuit is as a Voltage Regulator. It provides a constant voltage to the load from a source whose voltage may vary over a sufficient range.

The figure below shows the circuit arrangement of the Zener diode as a regulator.

Let a variable voltage Vin be applied across the load RL. When the value of Vin is less than Zener voltage VZ to the Zener diode no current flows through it and the same voltage appearing across the load. The Zener diodes conduct a large current when the input voltage Vin is more than the Zener Voltage Vz. As a result, a large amount of current flows through series resistor R which increases the voltage drop across it.

Zener diodes are generally employed in multimeters to protect the meter movement against the damage from the accidental overloads. The Zener diode is connected in parallel with the meter from the safety point of view.

The circuit diagram is shown below: 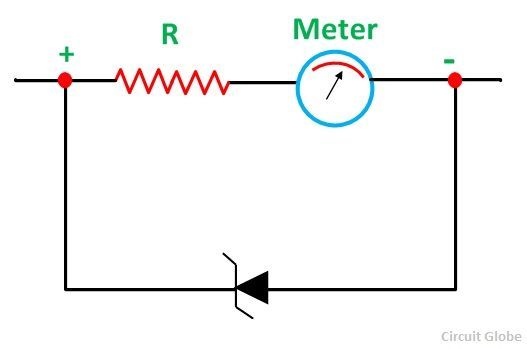 The Meter movement is protected from any damage as most of the current passes through the Zener diode, in case of any accidental overload. When the meter movement is required to be protected, regardless of the applied polarity (i.e when an alternating current is passed).

The circuit arrangement is modified as shown in the figure below: 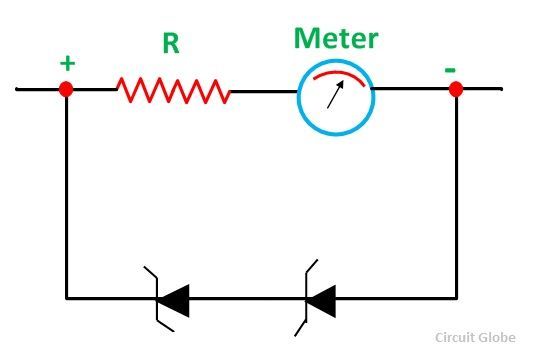 Zener diodes are also used to convert sine wave into square waves. The circuit arrangement is shown below:

As a result, a heavy voltage drop appears across the series resistor R and hence the peaks of the input wave are clipped off when appearing at the output as shown in the above figure. The input sine wave is clipped off at the peaks and a square wave appears at the output.

3 thoughts on “Applications of Zener Diodes”