Diodes are the electronic components devices which allow the current to flow more easily and smoothly through any device in a particular direction. It has two electrodes, one is known as Anode, and the other one is Cathode. Semiconductor materials like Silicon and Germanium are used for the manufacturing of the diodes.

The diodes are used for various purposes such as:

There are a large number of semiconductor diodes of different ratings which are used in electronic circuits as per the requirement. The diodes are of different shapes, sizes and colours.

The figure below shows the shape of BY 127 diode which can carry 1 Ampere forward current with Peak Inverse voltage of 1000 V safely. It is green in colour and the direction in which it can conduct is marked by the symbol as shown in the figure. In the same series, there are also other diodes like BY 118 etc. 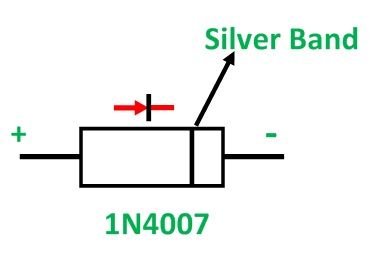 The figure below shows the shape of OA 79 diode. It is made of transparent glass. A Red mark on the body (arrow) denotes the positive terminal. The other diode of the same series is OA 80, OA 85, etc.

If a symbol or mark on the body of a diode showing its terminal polarity is missing or rubbed off, then the terminal’s polarity can be determined with the help of an Ohm Meter or Multimeter.

The figure below shows that the polarity of the terminals of the battery contained within an ohmmeter appears on the leads of the Ohm Meter. 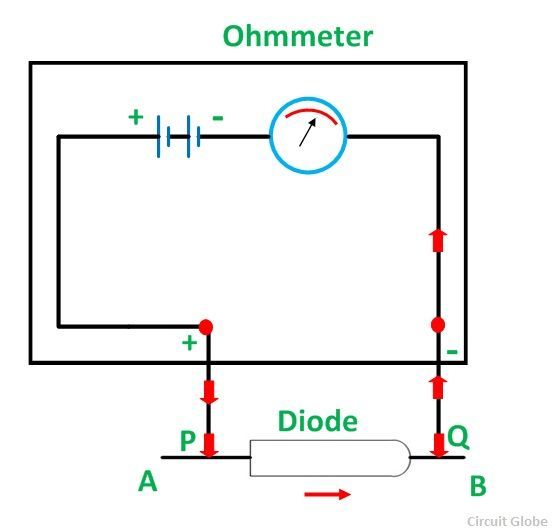 However, if the diode does not conduct and there is no deflection in the Ohm Meter, the terminals of the diode are opposite as before.