Consider a three single phase core type transformer positioned at 120° to each other as shown in the figure below. If the balanced three-phase sinusoidal voltages are applied to the windings, the fluxes φa, φb and φc will also be sinusoidal and balanced. If the three legs carrying these fluxes are combined, the total flux in the merged leg becomes zero. This leg can, therefore, be removed because it carries the no flux. This structure is not convenient for the core. 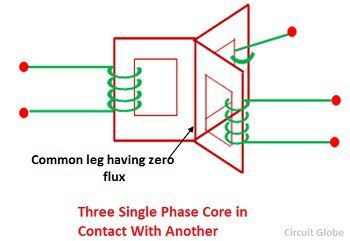 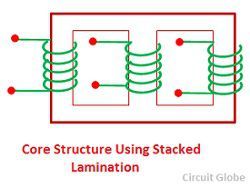 The shell type 3-phase transformer can be constructed by stacking three single phase shell transformer as shown in the figure below. The winding direction of the central unit b is made opposite to that of units a and c. If the system is balanced with phase sequence a-b-c, the flux will also be balanced 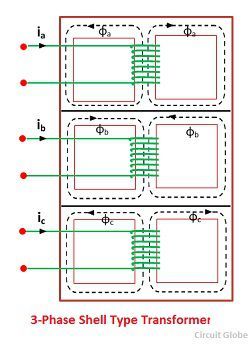 The magnitude of this combined flux is equal to the magnitude of each of its components. The cross section area of the combined yoke is same as that of the outer leg and top and bottom section of the yoke. The imbalance in the magnetic path has very little effect on the performance of the three shell-type transformers. The windings of the shell type three phase transformer are either connected in delta or star as desired.