There is no phase shift between the star-star and delta-delta 3-phase transformer. Most of the power transformer is either star-delta or delta star connected. In such type of transformers, even in the normal operating condition, the phase-to-phase voltages and phase-to-neutral voltage of high voltage side are displaced from the corresponding voltage of low voltage side. Similarly the current on the two sides are displaced.

Considered 3-phase star-delta transformer with primary side Y-connected and secondary with delta-connected as shown in the figure below. The polarity markings are indicated on each phase. The dots on the windings indicate the terminals which are positive at the same time on the undotted terminals.

The alternating way is to label delta as b→a, c→b and a→c; Thus we get a standard yd1, -30º connection. If the polarities on the delta side are also reversed, we have standard yd11, 30º connection. The yd11 are used for line-to-line voltage, and yd1 are used for line currents and phase (line-to-neutral) voltage. Line-to-line transformation ratio is being taken to be unity.

The positive and negative sequence voltages on the primary (star) and secondary (delta) sides of the transformer are shown below. When the power flow is reversed, and the delta of the transformer acts as primary and star act as secondary, then the voltage phasor does not change, but all the current phasor are reverse. 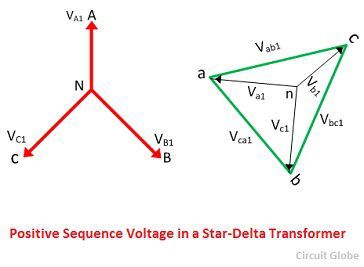 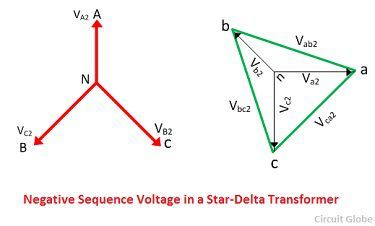 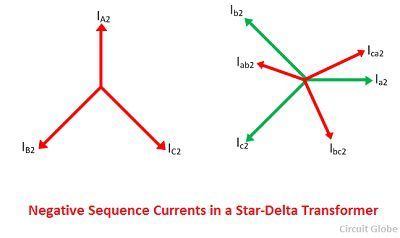