Parallel Operation of a Single Phase Transformer means that the two or more transformers having the same polarities, same turn ratios, same phase sequence and the same voltage ratio are connected in parallel with each other.

The circuit diagram of two single-phase transformer A and B connected in parallel are shown below: 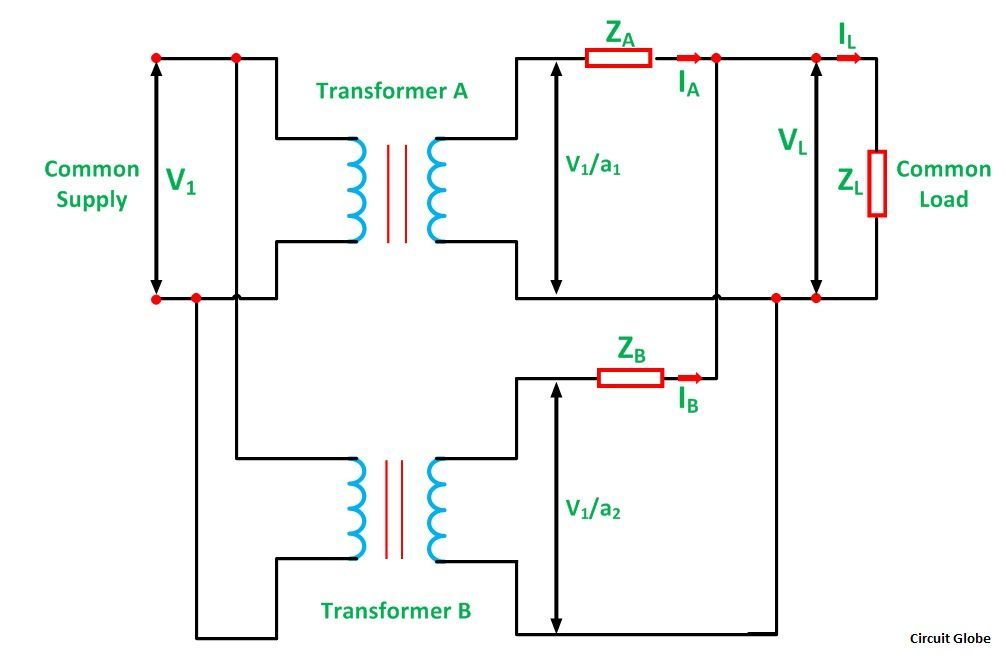 Now putting the value of IB from the equation (1) in equation (3) we will get,

The current IA and IB  have two components. The first component represents the transformers share of the load currents and the second component is a circulating current in the secondary windings of the single-phase transformer.

The undesirable effects of the circulating currents are as follows

In order to eliminate circulating currents, the voltage ratios must be identical. That is a1=a2

This condition ensures that the load sharing between the two single-phase transformer is according to the rating of each transformer. If the per-unit equivalent impedance are not equal, then the transformer will not share the load in proportion to their kVA ratings. As a result, the overall rating of the transformer bank will be reduced.

Equation (9) can also be written as

The current in the equations (7) and (8) is changed into volt-amperes by multiplying the two equations by the common load voltage VL.

Therefore, we know that,

The total load in volt-ampere (VA) is

The volt-ampere of transformer A is

Similarly, the volt-ampere of transformer B is

Hence, the various equations will be written as shown below

Equation (13) tells that the volt-ampere load on each single-phase transformer is inversely proportional to its impedance.

3 thoughts on “Parallel Operation of a Single Phase Transformer”