The circuit of RVDT is shown in the figure below. The working of the RVDT is similar to the LVDT. The only difference is that the LVDT uses the soft iron core for measuring the displacement, whereas the RVDT uses the cam shape core rotated between the primary and secondary winding with the help of the shaft.

The ES1 and the ES2 are the secondary voltage, and it varies with the angular displacement of the shaft.

The G is the sensitivity of the RVDT. The secondary voltage is determined by the help of equation shown below.

The difference between ES1 – ES2 gives a proportional voltage.

The sum of the voltage is given by constant C. 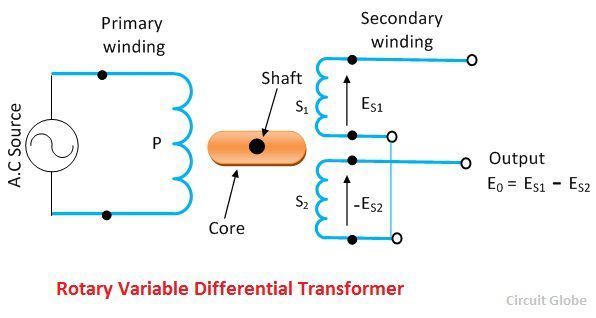