A four-phase or (4/2 pole), single stack variable reluctance stepper motor is shown below. Here, (4/2 pole) means that the stator has four poles and the rotor has two poles. 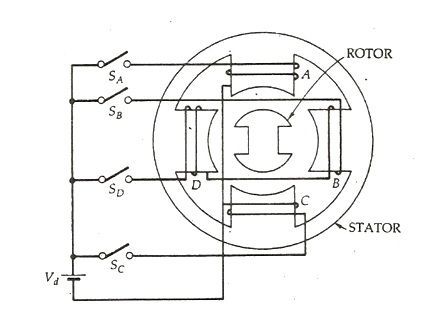 The four phases A, B, C, and D are connected to the DC source with the help of a semiconductor, switches SA, SB, SC, and SD respectively, as shown in the above figure. The phase windings of the stator are energized in the sequence A, B, C, D, A. The rotor aligns itself with the axis of phase A as winding A is energized. The rotor is stable in this position and cannot move until phase A is de-energized.

The magnitude of the step angle of the variable reluctance motor is given as:

The step angle is expressed as shown below:

Where, NS is the stator poles

Similarly, if the sequence is reversed as A, A+D, D, D+C, C, C+B, B, B+A, A, the rotor rotates at a step angle of 45 degrees in the anticlockwise direction.

Here, (A+B) means that the phase windings A and B both are energized together. The resultant field is midway between the two poles. i.e. it makes an angle of 45 degrees with the axis of the pole in the clockwise direction. This method of shifting excitation from one phase to another is known as Microstepping. By using Stepper Motor, lower values of the step angle can be obtained with a number of poles on the stator. 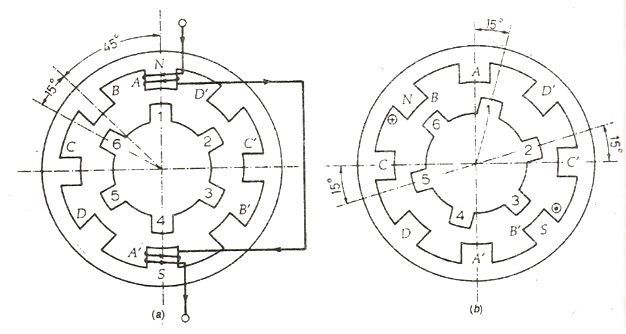 The opposite poles are connected in series forming 4 phases. The rotor has 6 poles. Here we have considered only phase A to make the connection simple. When the coil AA’ is excited, the rotor teeth 1 and 4 are aligned along the axis of the winding of phase A. Thus, the rotor occupies the position as shown in the above figure (a).

The sequence A, B, C, D, A is followed, and the four steps of rotation are completed, and the rotor moves 60 degrees in a clockwise direction. For one complete revolution of the rotor 24 steps are required. Thus, any desired step angle can be obtained by choosing different combinations of the number of rotor teeth and stator exciting coils.