Definition: The bridge which measures the inductance in terms of capacitance is known as Owen’s bridge. It works on the principle of comparison i.e., the value of the unknown inductor is compared with the standard capacitor. The connection diagram of Owen’s bridge is shown in the figure. 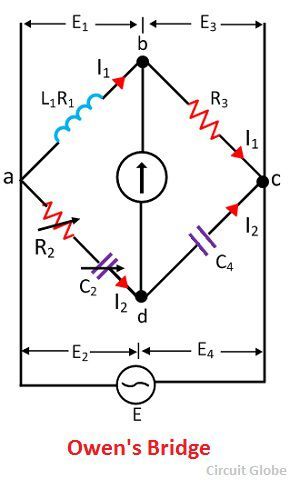 The ab, bc, cd and da are the four arms of Owen’s bridge. The arms ab are purely inductive and the arm bc is purely resistive in nature. The arm cd has fixed capacitor and the arm ad consists the variable resistor and capacitor connected in series with the circuit.

The phasor diagram of Owen’s bridge is shown in the figure below. 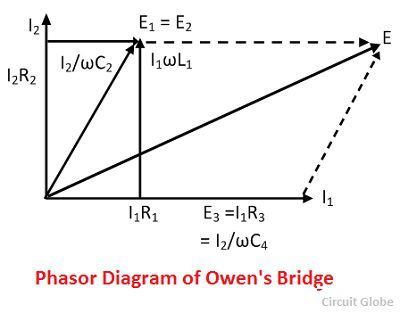 The current I2 and the voltage I2R2 are represented on the vertical phases shown in the figure above. The supply voltage is obtained by adding the voltage V1 and V3.

On separating the real and imaginary part we get,

The following are the advantages of Owen’s bridge.

The Owen’s bridge is modified by connecting the voltmeter in parallel with the resistive arms of the bridge. The direct and alternating both the supply is given to the bridges. The ammeter is connected in series with the bridge for measuring the DC current. and the alternating current is measured by the help of voltmeter.