Definition: The Anderson’s bridge gives the accurate measurement of self-inductance of the circuit. The bridge is the advanced form of Maxwell’s inductance capacitance bridge. In Anderson bridge, the unknown inductance is compared with the standard fixed capacitance which is connected between the two arms of the bridge.

The bridge has fours arms ab, bc, cd, and ad. The arm ab consists unknown inductance along with the resistance. And the other three arms consist the purely resistive arms connected in series with the circuit. 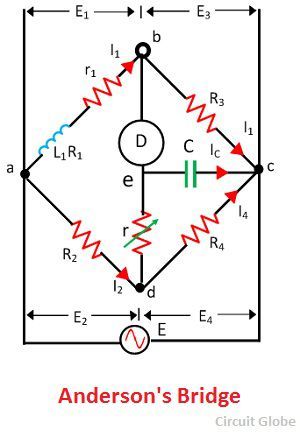 The static capacitor and the variable resistor are connected in series and placed in parallel with the cd arm. The voltage source is applied to the terminal a and c.

The phasor diagram of the Anderson bridge is shown in the figure below. The current I1 and the E3 are in phase and represented on the horizontal axis. When the bridge is in balance condition the voltage across the arm bc and ec are equal. 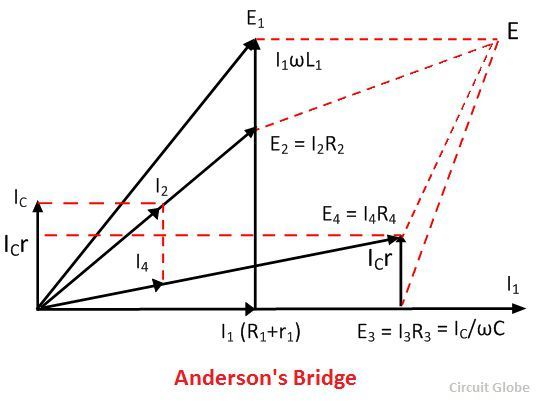 The current enters into the bridge is divided into the two parts I1 and I2. The I1 is entered into the arm ab and causes the voltage drop I1(R1+R) which is in phase with the I1. As the bridge is in the balanced condition, the same current is passed through the arms bc and ec.

The V1 is also obtained by adding the I1(R1+r1) with the voltage drop ωI1L1 in the arm AB. The phasor sum of the E1 and E3 or E2 and E4 will give the supply voltage.

The other balance condition equation is expressed as

By substituting the value of Ic in the above equation we get,

on equating the equation, we get

Equating the real and the imaginary part, we get

The following are the advantages of the Anderson’s Bridge.

The main disadvantages of Anderson’s bridge are as follow.

Because of the above-mentioned disadvantages, Maxwell’s inductance capacitance bridge is used in the circuit.